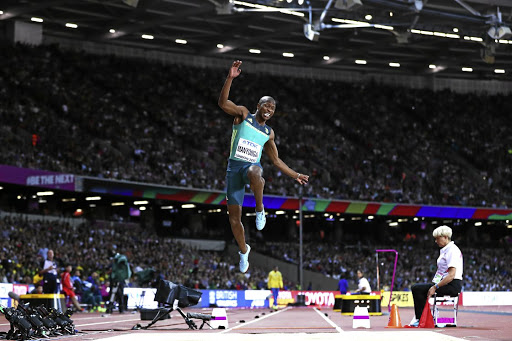 Long jumper Luvo Manyonga will be hoping to take his outdoor form indoors when he competes in Birmingham tonight.
Image: Michael Steele/Getty Images

Long jumpers could thrust South African athletics on to the global spotlight yet again when an all-powerful trio of Luvo Manyonga, Ruswahl Samaai and Khotso Mokoena take to the sandpit in pursuit of glory at the IAAF World Indoor Championships tonight.

Manyonga, not one for self-doubt, once again assured the nation that "the aim is the gold medal" at the event that will mark his debut in a world indoor competition.

His recently acquired 8.40m African indoor record, which makes him No 1 in the world this year, speaks volumes for a lad who has endeared himself to the world with his monstrous leaps that saw him clinching gold at last year's global outdoor championships in London.

Veteran Mokoena, 32, is gunning for his third medal, having already collected gold in 2008 and silver in 2010.

For Samaai, a bronze medallist at last year's outdoor global championships, this weekend's showpiece will mark a second attempt to finish in the medals.

The trio will have their work cut out though, with Manyonga's runner-up at the London Championships, Jarrion Lawson, 23, of the US, also among the contenders.

Apart from the jumpers, the rest of the six-member SA team have the pedigree to fly the flag high at the Birmingham Arena in the UK.

African 110m hurdles outdoor champ Antonio Alkana will be eager to go beyond the first round in the 60m hurdles after he fell short of a place in the semifinals two years ago.

Carina Horn (60m) and Dom Scott-Efurd could also challenge for a podium finish.