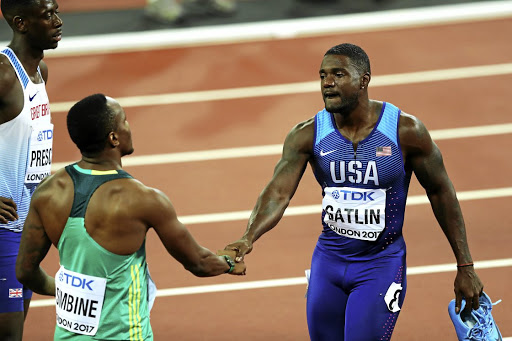 Akani Simbine is set to face Justin Gatlin again when the world 100m champion lines up in the second leg of Athletix Grand Prix in Pretoria next month.
Image: RICHARD HEATCOTE

This was revealed by Michael Meyer of Stillwater Sports, an agency that has been tasked by ASA to look after the federation's commercial and marketing interests.

Gatlin, who dethroned Usain Bolt as the new global champ over the short dash at last year's IAAF World Champonships, was yesterday confirmed as the latest big-name to accept an entry in the Grand Prix that will take off at Ruimsig Athletics Stadium, Roodepoort, West Rand, on March 1.

Loathed by some and loved by many, the 35-year-old American sprinter will race in a rarely run 150m at the second leg of series at Tuks Stadium, Pretoria on March 8.

"I've been dealing with it [and] has taken a long time, up to six months, because Justin has got a busy programme," Meyer, a former middle distance runner, told Sowetan yesterday.

It is a known fact that athletes of Gatlin's calibre don't come cheap and they can earn up to $400000 (R4.8-million) in appearance fees per meet. This is what Bolt used to earn at some meetings.

Meyer could not disclose the details of the contract but confirmed Gatlin was not for free.

"He's a professional athlete and yes, there is a commercial aspect to it but that's not what is important. I worked with his agent and we've got a long term plan.

"Our task with ASA is to establish world class track and field events in SA and to bring stars to compete here.

"So with Justin being the world 100m champion and South Africa having top sprinters in its own right, we thought it will be a big motivation and help grow our sport.

"[The Grand Prix] will be a start for his season and he's excited to run against the young talent here."

Even Olympic and world 400m champion Wayde van Niekerk - who is still recovering from a knee surgery - weighed in on the impact of local sprinters.

"Seriously shows the quality @AkaniSimbine brought to the game for a legend like Gatlin to consider SA...," Van Niekerk wrote on his Twitter account, backing his friend and fierce competitor Akani Simbine to outshine Gatlin should the two square up in the Grand Prix.

Asked if it was one of the conditions from Gatlin to compete in the 150m distance Meyer said: "It's early in the season and it's normal for athletes to do unusual distances."

The final leg is at Paarl, Western Cape, on March 22.