Chung gives Djokovic a taste of his own medicine 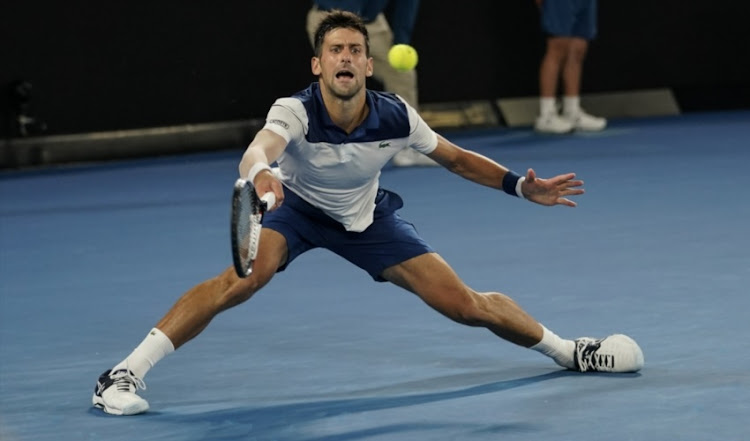 Novak Djokovic of Serbia plays a forehand in his fourth round match against Hyeon Chung of South Korea on day eight of the 2018 Australian Open at Melbourne Park on January 22, 2018 in Melbourne, Australia.
Image: XIN LI/Getty Images

For Novak Djokovic it must have felt like some nightmarish fight to the death against a clone of himself on Monday as Chung Hyeon stunned the six-times Australian Open champion with a display ripped straight out of the Serb’s textbook.

The 30-year-old who has ruled like no other on Rod Laver Arena simply had no answer as Chung, nine years his junior, wore him into the ground to win 7-6(4) 7-5 7-6(3) and become the first South Korean to reach a grand slam quarter-final where he will face American Tennys Sandgren.

Time and again during the three hour 21 minute encounter, 14th seed Djokovic had Chung on the run but the world number 58 displayed almost superhuman court coverage to prevail in rallies he had no right to still be involved in.

It is exactly those defensive skills that have earned Djokovic 12 grand slam titles and it was no surprise when, after claiming the biggest scalp of his career, the spectacle-wearing Chung described the Serb as his idol.

Tellingly, Chung won 34 of the 54 rallies that exceeded nine strokes, most memorably when he slid at full-stretch to hook a forehand winner past his opponent to take a 5-3 lead in the third set tiebreak.

It proved the final straw for a weary Djokovic who netted a forehand return on the next point and then shunted a backhand into the tramlines after yet more Chung defiance.

The ice-cool Chung barely celebrated, but after being warmly congratulated by Djokovic he walked across to milk the applause from the sell-out crowd, including a sizeable Korean contingent.

To his credit Djokovic, who again wore a compression sleeve on his playing arm to protect the elbow that forced him off Tour last year and was clearly causing discomfort, fought tenaciously like the great champion he is.

Had he grabbed the third set a fightback might have been on the cards, although Chung, who frazzled fourth-seeded German wunderkind Alexander Zverev in five sets in the previous round, can apparently run all night.

“I was just thinking ‘I’m two love up in sets so if I lose (the third) I still have two more sets. I can play two more hours. I’m younger than Novak so I don’t care!’” he said.

“I was just trying to copy Novak because he’s my idol. My dreams have come true tonight.”  OUTPLAYED Djokovic was always playing catch-up once he had dropped his opening two service games with a rash of double faults to trail 4-0. He clawed back that deficit, hit back from 4-1 in the second set and 3-1 in the third but could never get to grips with an opponent few will fancy facing.

“Congratulations to Chung on an amazing performance,” Djokovic said. “He deserved to win. Whenever he was in trouble he came out with some great passing shots and at the back of the court he was like a wall.” There were signs that Djokovic was in pain with his elbow in the first set and he required treatment on that and his feet after losing the tiebreak 7-3.

The relentless Chung moved 4-1 ahead in the second set but again Djokovic recovered, only to falter when serving at 5-6. On set point Djokovic pounded three consecutive forehands deep in into Chung’s backhand, each one returned at full stretch, before Djokovic cracked and netted a forehand.