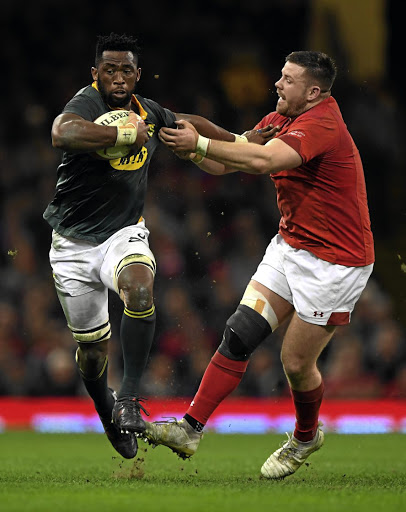 Springbok Siya Kolisi evades a tackle from Rob Evans during the International against Wales in Cardiff on Saturday.
Image: STU FORSTER

Kolisi, who unexpectedly became the first black player to captain the Springboks in a Test after injury-plagued Eben Etzebeth failed to return to the field at the Principality Stadium, spoke passionately about the coach while seated next to him on Saturday.

"We have a great coach. It was a tough year last year. We play in a country where rugby means a lot. From last year to this year he has bitten the bullet for us," Kolisi said. "Every time we win it is all about the players in the articles. It's about us and how amazing we are. As soon as something bad happens then the coach isn't good enough to coach.

"From where we came last year, he has done a great job. I don't think it was an easy road for him. I'm not making any excuses. I just think it was tough for us as players to adapt to everything. He stood by us," said Kolisi.

Loosehead Steven Kitshoff believes continuity will only stand the Springboks in good stead leading up to the next World Cup. "It was a positive tour. There is a big brotherhood developing between the players. It is unfortunate we couldn't end it on a high.

"If we stick to our processes and keep working as a team we will develop into something great. If this team sticks together over the next two years it will be absolutely brilliant come World Cup time," said Kitshoff.

Coetzee believes losing coaching expertise during the tour didn't help. Before the Test against Italy, Johann van Graan left for Munster and Brendan Venter couldn't involve himself because of his commitment to the Italian Rugby Federation.

"It is not conducive to lose coaches during a tour. It has a massive impact. In a team context the players want consistency," said Coetzee.

"Since last year, there has been uncertainty. Look at how long Warren Gatland has been in his job, Rob Howley, as well and Shaun Edwards.

"Joe Schmidt [Ireland's coach] was going to be fired after the World Cup but they kept him and they started winning," Coetzee said.

The coach's future will be determined after an SA Rugby review in the coming weeks.