The Dolphins make peace with playing in the water 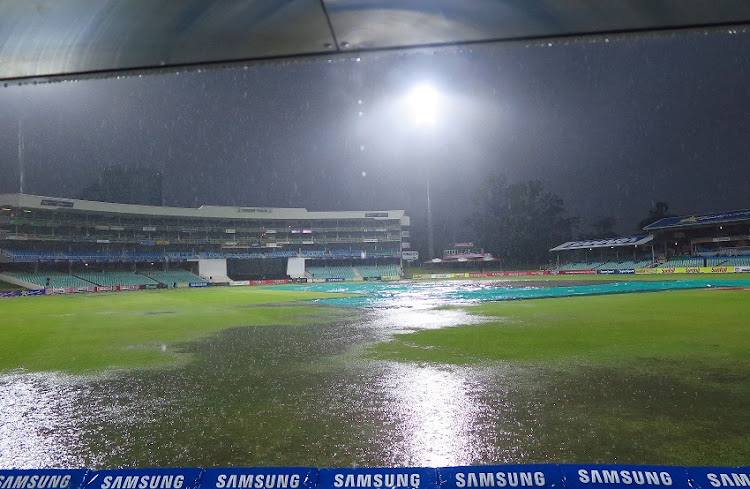 General views of the venue after persistent rain during the RAM SLAM T20 Challenge match between Hollywoodbets Dolphins and Warriors at Sahara Stadium Kingsmead on November 22, 2017 in Durban.
Image: Anesh Debiky/Gallo Images

The last two Ram Slam T20 Challenge matches for the Dolphins in Durban were washed out and coach Grant Morgan says there is no use complaining about the weather.

The Dolphins are scheduled to play their fifth match of the campaign on Friday when they host the Cape Cobras at Kingsmead Stadium‚ but they have only completed two because of rain that has disrupted them at home and followed them on the road.

Their two home matches against the Knights and the Warriors did not produce results and it was the same story when they visited table toppers Titans at Willowmoore Park in Benoni last week Friday‚ a game that was abandoned without a ball bowled.

“I think we have reached a point where we have come to peace with that‚” he said.

“It hasn’t affected us and instead we look at it from the opposite side‚ which is we are fresher than the other sides and that will hopefully give us the advantage.”

Minimal rain hast forecast for Durban on Friday but anything is possible in KwaZulu Natal as weather patterns have been mainly unpredictable in recent weeks.

As a result of the rain disruptions to their campaign‚ Dolphins have amassed 10 points‚ which places them third on the standings and two points behind the Cobras and 13 fewer than runaway leaders the Titans.

“We haven’t really spoken about how many games we need to win to book a semi-final spot‚" he said.

"We like to take it one game at a time and for now that focus is on this Cobras game.

"I think the boys really want to entertain but if I had to put a number on it‚ I will probably say three wins will do it.”

The Cobras arrive in Durban on the back of a morale-boosting win over the Warriors in Paarl on Wednesday which has moved them from last to second position and has given them a strong chance to reach the play-offs.

“It was great to have our people behind us in the last three matches and it was even better to deliver for them‚” Prince said.

“Not only did we get three wins in a row‚ but we were tested in many areas‚ especially our character‚ and came through in a lot of them.

"That was very encouraging.

"There are no easy teams to play against in this competition.

"Every game is important and this one will be no different.

"But we will be confident on the back of those last three results and hopefully we can win a game in Durban to try and build on that.”