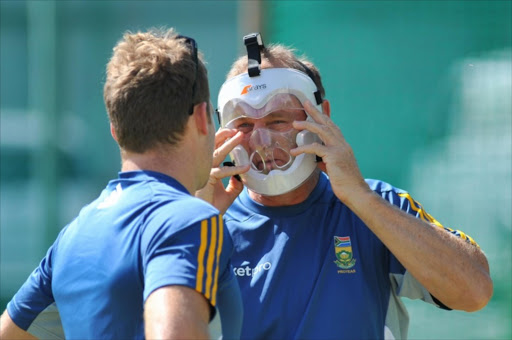 You would have to go a long way to find a man as steeped in cricket as South Africa’s assistant coach‚ Adrian Birrell.

All the way to his native Eastern Cape‚ in fact‚ where another son of the province as well as another dyed in the wool man of cricket has now buried his mother and delivered her eulogy‚ and will soon return to South Africa’s tour of England.

But Russell Domingo could be coming back to say another goodbye — to the team he has coached for four years.

“Our thoughts have been with him‚ and it’s fantastic for him to be sitting on his couch and watching us win.”

South Africa’s surge to victory by 340 runs with more than a day to spare in the second test at Trent Bridge on Monday was emphatic a response as they could deliver to going down by 211 runs in four days at Lord’s.

How did the visitors turn things around so emphatically?

“I know this is boring‚ but it was business as usual‚” Birrell said.

“We prepared the same way as for all other test matches; we just did exactly the same thing.

“We didn’t panic after Lord’s and the feedback from the players was that we had prepared very well there but had played poorly.

“So it was about preparing as we do for every other test match.”

Not even similar triumphs at The Oval and Old Trafford‚ where the last two tests will be played‚ are likely to spare Domingo.

On Friday Cricket South Africa’s (CSA) board will hear from the panel they appointed to recommend who should coach South Africa when Domingo’s contract expires.

That happens at stumps on the scheduled last day of the fourth test at Old Trafford. Or‚ if you prefer‚ August 8.

Those among Domingo’s players who have been asked who should be the coach have all given the same answer: Domingo.

Not for the first time‚ CSA seem set not to follow sound advice.

That’s a pity‚ because Geoff Toyana — Domingo’s likely successor — deserves a better welcome than he might receive inside and outside the dressingroom.

CSA have said they will announce their decision on the coach after the series‚ but some insiders say they could do so before the fourth test.

Not that CSA will be in control.

Who the panel will put forward is already out there — if you believe some of the whispers — and who gets the job will probably be‚ too‚ long before the press release creaks through the board’s clumsy systems.

With the series currently level at 1-1‚ and regardless of what happens at The Oval‚ the rubber will be on the line at Old Trafford.

There is no worse way to go into the deciding match of a big series than with an important question hanging in the air like a bad smell‚ especially when the people most affected by its answer — the same players who are being asked to win that series — appear to have no say in the matter.

Thing is‚ this bad smell has been around since January 28‚ when CSA first said they were shopping for a new coach.

“Even in the last … I don’t know how many months‚ there has been a lot of uncertainty‚” Birrell said.

“We just got on and tried to do the job as best we could.”

Birrell took aim at the press when he told the reporters listening to him that the South Africans kept “media noise … on the outside so whatever you say doesn’t affect us”.

“We speak a lot about not bringing outside influences into our inner circle; we work very hard at that‚” he said.
But it’s difficult not to include the suits into the bargain.

Whatever. Birrell‚ a farmer who engages on subjects as far from cricket as beekeeping and drought‚ lives in the real world. Coaching is but a passion‚ but a passion nonetheless.

What’s the best thing about being elevated to head coach in Domingo’s absence?

“That it’s only temporary.”

“As coaches you never have hindsight‚ you’ve always got to try and think ahead.”

Attention. There’s a man of cricket on deck.

Perhaps not for much longer. - TimesLIVE