SA's history in the CHAN does not make for inspiring reading 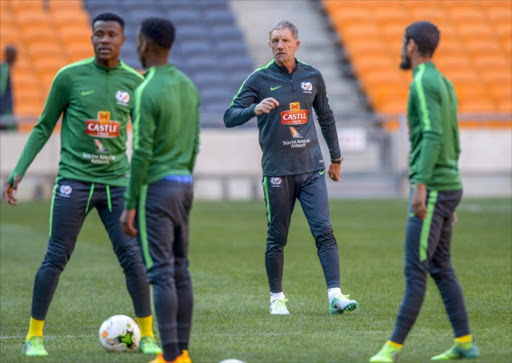 South Africa will start their fourth qualification campaign for the African Nations Championship (CHAN) when they travel to Botswana this weekend with another scrabbled together squad under coach Stuart Baxter.

The CHAN tournament is open only to players who ply their trade in their domestic leagues‚ and aside from when South Africa hosted the tournament in 2014‚ they have always battled to put together a squad that truly reflects the quality of the PSL.

They entered the qualifiers for the first tournament that was staged in Ivory Coast in 2009‚ but were ousted at the final stage by Zimbabwe‚ losing both legs of their qualifier for a 3-0 aggregate loss.

South Africa had received a walkover in the previous round when Mauritius withdrew late.

They defeated Botswana in the qualifiers for the 2011 tournament in Sudan‚ playing to a 0-0 draw away and then winning the home tie 2-1.

That set up a meeting with Zambia‚ where South Africa advanced 1-0.

The squad that competed at the finals in Sudan came mostly from the lower leagues‚ though some players have gone on to enjoy success in the Premier Soccer League.

Current BidVest Wits player Jabulani Shongwe is one of those‚ having gone on to represent Bafana Bafana‚ as did Edward Manqele‚ who at the time was with Trabzon FC‚ but later played for Free State Stars‚ Mamelodi Sundowns and Kaizer Chiefs.

Free Stars Stars winger Katlago Mashego was with third-tier Baroka FC when he was selected‚ but has been a solid campaigner in the top-flight and a player who has been called up to Bafana in the past.

And current Sundowns star Tiyani Mabunda was another who came from relative obscurity at Black Leopards to play in the tournament.

South Africa topped their group in Sudan with wins over Ghana‚ Niger and Zimbabwe‚ with Shongwe the star of the show‚ before they lost 2-0 to Algeria in the quarterfinals.

South Africa qualified as hosts in 2014‚ and there were high hopes that with a powerful squad of home-based internationals that included the likes of Siphiwe Tshabalala‚ Itumeleng Khune‚ Bernard Parker and Hlompho Kekana‚ they could win.

But after a 3-1 win over Mozambique in their first group game‚ they were held 1-1 by Mali and then lost 3-1 to Nigeria and did not make the quarterfinals.

It was‚ perhaps‚ the final straw for SAFA and coach Gordon Igesund did not see his contract renewed.

South Africa breezed past Mauritius in their first qualifier for the 2016 competition‚ with the likes of Thamsanqa Gabuza and Mandla Masango on target in a 5-0 aggregate win.

But they came unstuck against Angola in the second round‚ losing their home tie 2-0. Despite a 2-1 away win‚ they lost out on aggregate and did not make the finals.