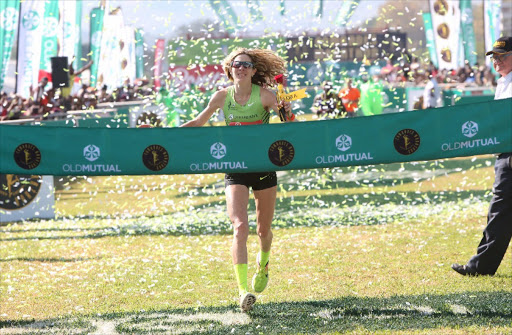 American athlete Camille Herron gave credence to the unpredictable nature of the Comrades Marathon up run with her maiden win in a time of 6:27:35.

She became the first American female athlete since Anne Trason did the double in 1996 and 1997 to win the race and the ease in which she went about her business was astounding.

She was hardly challenged for the best part of the race and put a seasoned competitor like Charne Bosman in the shade. Bosman finished third in a time of 6:39:51.

Pietermaritzburg's unseasonal and unexpected winter heat disorientated Herron partially when she walked to the end but when told she wasn't finished‚ she trotted to the finish line.

Herron told reporters at the finish line that she thought she was done with the race once she got to the grass and had to be reminded before she dug up her last ounce of strength to finish the race.

Russian Alexandra Morozova was second in a time of 6:31:45.

Once she took charge of the race in Pinetown‚ she never looked like losing and the only time she was remotely threated was in Camperdown when Morozova tried to charge.

The 6:06 minute gap Herron had on Morovoza was substantial and in the end‚ the Russian had too much to do.