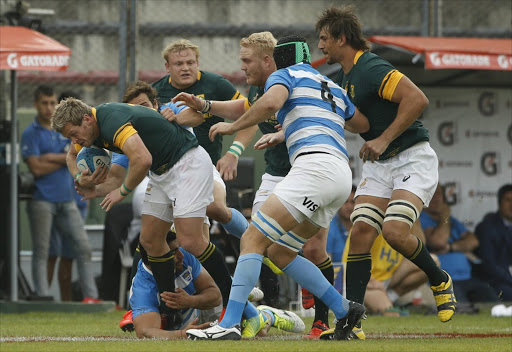 World Rugby‚ the sport’s governing body‚ on Wednesday confirmed sweeping changes to its eligibility policy that will have a significant impact on South African rugby.

The World Rugby Council passed amendments to Regulation 8 of its constitution in Kyoto‚ Japan following a detailed review process.

Under the amended law‚ for a player to qualify for a country he would have to serve a consecutive five-year (60 month) residency period instead of a consecutive three-year (36 month) duration.

There is a grace period before the change kicks in‚ with the amendment only effective from December 31‚ 2020.

That means South African players‚ who are uncapped Springboks or Junior Springboks (SA’s two nominated representative national teams) and are hoping to qualify for Test eligibility for another country‚ would need to take up new contracts this year.

His three-year eligibility period to play for Scotland would come to an end in time for the 2019 November Tests‚ when Scotland could select him.

But any players taking French‚ Irish or British club contracts in 2018‚ in the hope of qualifying as Test players for one of those countries‚ would have to wait five years.

It could lead to a short-term flurry of young SA players‚ who are uncapped at Test or Junior Bok level‚ to search for overseas contracts in the next few months to avoid a 60-month eligibility period.

But from next year‚ this significant change would be a deterrent for young players hoping to forge a Test career elsewhere.

World Rugby has also banned national under-20 teams as the nominated second representative national team from January 1‚ 2018. In simple terms‚ future Junior Springbok players could play for another country‚ which hasn’t been the case for the past four seasons.

It leaves SA Rugby with a decision to make on whether the SA ‘A’ team would become its second nominated representative team.

In 2013 the Junior Boks were nominated due to lack of fixtures for the SA ‘A’ team. SA ‘A’ have only played two matches in five years.

“This reform of Regulation 8 governing eligibility is an important and necessary step to protecting the integrity and credibility of international rugby‚” Beaumont said.

“This extension to the residency period within a forward-thinking reform package will ensure a close‚ credible and established link between a union and players‚ which is good for rugby and good for fans.

“I would like to thank my union colleagues for their support and in particular the leadership role that Agustín Pichot played in this very important process that has delivered an outcome that is good for the global game.”

Pichot added: “This is an historic moment for the sport and a great step towards protecting the integrity‚ ethos and stature of international rugby.

“National team representation is the reward for devoting your career‚ your rugby life‚ to your nation and these amendments will ensure that the international arena is full of players devoted to their nation‚ who got there on merit.”

ELIGIBILITY CHANGES AT A GLANCE

The reformed Regulation 8 ensures that a player has a genuine‚ close‚ credible and established link with the nation of representation‚ and the key amendments are:

The addition of a residency criteria which permits players who have 10 years of cumulative residency to be eligible (effective May 10‚ 2017) (unanimously approved).

Unions may no longer nominate their U20s team as their next senior national representative team (effective 1 January‚ 2018) (majority).

Sevens players will only be captured for the purposes of Regulation 8 where the player has represented either of:

(i) the senior national representative sevens team of a union where the player has reached the age of 20 on or before the date of participation;