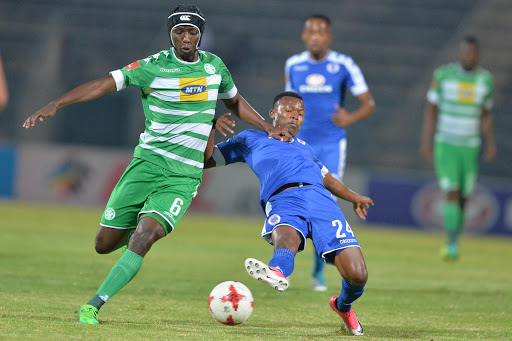 Mpho Maruping and Mandla Masango during the Absa Premiership match between SuperSport United and Bloemfontein Celtic at Lucas Moripe Stadium on May 03, 2017 in Pretoria, South Africa. (Photo by Lefty Shivambu/Gallo Images)

SuperSport United and Stuart Baxter resembles a marriage on the rocks which is only surviving for convenience and the sake of their under age children.

The spark between the former champions and Baxter, who is widely expected to be named the new Bafana Bafana coach in the next 48 hours, is gone and their 0-0 draw against Bloemfontein Celtic has all but ended whatever title ambitions they harbored.

For a while in the earlier months of the campaign, United looked genuine contenders for the title with solid and consistent performances but their campaign began to unravel when it emerged that he was being eyed by Safa.

It is known that United honchos are not happy with the protracted negotiations between Safa and Baxter which have resulted in the team’s recent slump that has cost them dearly.

It is not yet known whether Baxter will leave United immediately, if he is confirmed as the new Bafana coach, or he is going to go on with the club and double up his duties with that of the national team.

When the rumours about Baxter and Safa started to surface, United lost to Baroka and Tshwane rivals Mamelodi Sundowns twice in quick succession and they lost ground on pacesetters on the log before he took medical leave due to illness.

In his absence, longtime assistant coach Kaitano Tembo returned the club to winning ways with victory over Bidvest Wits that was followed by a draw against Kaizer Chiefs in his two matches in charge.

Baxter returned against Celtic on Wednesday, the day Safa released a statement confirming that they have finalised an agreement with the successful candidate for the Bafana coaching job.

The news of the Safa statement may have played on the minds of the United players as they laboured to this share of the spoils with struggling Celtic that has left them with 42 points from 26 matches.

On the other hand, Celtic remain twelfth position 26 points from as many games and they will have to improve their performance in their next three matches against Orlando Pirates, Ajax Cape Town and Free State Stars.

For United, their next three league matches they have tricky clashes against Polokwane City, Cape Town City and Chippa United where they will be looking to get positive results to move out of the relegation zone.