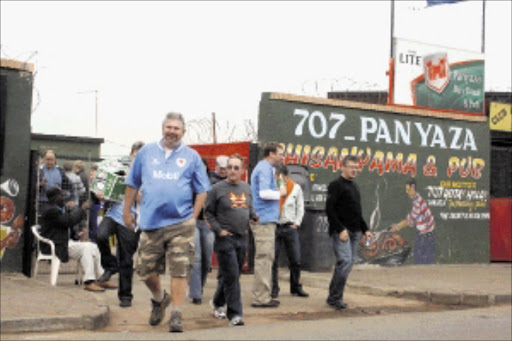 A file photo of rugby fans having a jol at Panyaza, a braai and pub at nearby White City section across from Soweto's Orlando Stadium. Pic: Bongani Mnguni.

It’s taken seven years but rugby will return to the Orlando Stadium in June when SA ‘A’ host the French Barbarians at the iconic Soweto venue.

The Bulls famously hosted the 2010 Super Rugby semi-final and final at the Orlando Stadium‚ beating the Crusaders and Stormers on the way to their third title.

The two weeks that took a traditional Loftus rugby crowd to Soweto to support the Bulls remains one of the most warmly endearing moments in post-apartheid rugby in this country.

Soweto residents and businesses warmly opened their hearts to the traditionally conservative Bulls crowd‚ creating a great ‘feel good’ factor in the country just weeks before the staging of the 2010 FIFA World Cup.

Unfortunately no more games have returned to the 40000-seater stadium.

But that will change on June 23 when the second match between Johan Ackermann’s SA ‘A’ side and the French Barbarians takes place.

The first match of the brief series‚ on June 16‚ will take place at the Moses Mabhida stadium in Durban.

It will be the first time a senior rugby match has taken place at the stadium built for the 2010 FIFA World Cup.

The main match at Orlando Stadium‚ which will start at 20h00‚ will be preceded by a curtain-raiser at 17h00 when the Blue Bulls take on the Golden Lions in the SuperSport Rugby Challenge Gauteng-derby.

“The hosting of these matches at two iconic venues will not only make for superb weekends of top-class international rugby between South Africa and France‚ but are also hugely exciting as we’ll be playing at non-traditional rugby venues‚” said SA Rugby CEO Jurie Roux.

“We would not have been able to do this without the assistance of the Gauteng Provincial Government and eThekwini Municipality – Moses Mabhida Stadium and we would like to thank them for their commitment to bringing rugby to new audiences.

“Supporters can look forward to two unique days of international rugby against a French Barbarians team that we understand will be quite strong‚ and will provide a proper challenge to Johan Ackermann and his SA ‘A’ team.”

More information on ticket prices and other exciting plans around these matches will be announced in due course.