“I’m going to steal the show on Saturday ... I’m getting bored of waiting,” says Luvo Manyonga 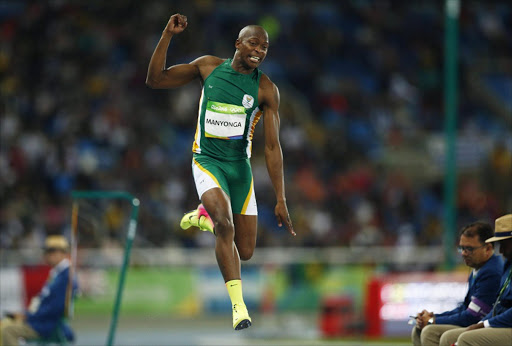 Move over Wayde van Niekerk‚ step aside Caster Semenya — the big-talking long-jumping Luvo Manyonga is threatening to steal the show at the SA championships in Potchefstroom this weekend.

“Everyone must come witness the best long jump in the world‚” said the silver medallist from the Rio Olympics last year‚ already No1 on the world list by nearly half-a-metre with the 8.62m effort he nailed in Pretoria last month.

“I’m going to steal the show on Saturday ... I’m getting bored of waiting.”

Manyonga will be one of four current Olympic medallists helping to push the quality of the 2017 edition to unprecedented heights.

Five sub-10-second sprinters will line up in the men’s 100m on Friday.

Olympic 400m champ van Niekerk‚ with a 9.98sec personal best‚ is far from being the favourite in the 100m‚ where Akani Simbine (9.89) has the inside track against Thando Roto (9.95)‚ Henricho Bruintjies (9.97) and former six-time champion Simon Magakwe‚ who went 9.98 in 2014 before refusing a doping test which resulted in a two-year ban.

Three sub-20-second stars will face off in the 200m on Saturday‚ with Simbine again the front-runner with his season’s best of 19.95.

Olympic 800m queen Semenya is going for the 400m and 800m double and silver medallist Sunette Viljoen should be unmatchable in the women’s javelin.

But Manyonga says his performance will be the one to watch‚ saying he intends to get close to the 8.95m world record set by American Mike Powell in 1991.

“[My] distance is going to be close to 9m‚” Manyonga said this week.

“My aim is not really to break [the world record] at SAs‚ but I’m focusing on going close‚” added the talented jumper‚ who met Powell at the 2010 world junior championships where he won the long-jump crown.

“We had a long chat ... and I thought this is a calling for me because I was born in the same year [he set the record] and I felt I would be the first person who is going to break his record.

“After I told him I’d break his world record‚ he said I have the potential ... he was telling me I must keep on jumping‚ I can change the long jump game.”

Even the coach of Ivan Pedrosa has spotted Manyonga’s talent‚ saying “I’d be the first person to jump 9m”.

His career was derailed after testing positive for tik in 2012‚ earning him an 18-month ban‚ during which time he battled addiction.

Manyonga has spent the better part of the past year living in a rehabilitation facility‚ and says he is beating his demons.

He hopes all his main long-jump rivals — 2008 Olympic silver medallist Khotso Mokoena‚ Ruswahl Samaai and Zarck Visser — will be in action in tomorrow’s competition‚ scheduled to start at 11am. “May the best win‚” Manyonga said.

And who’s the best?