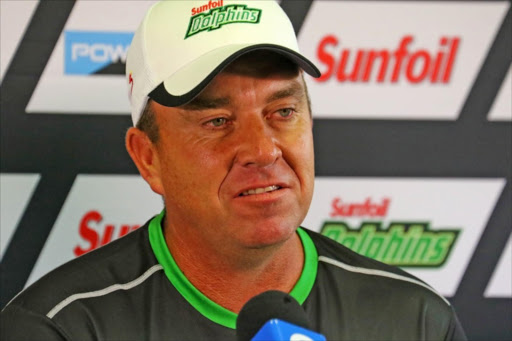 The Dolphins coach Grant Morgan has heaped praise on the brave and fresh leadership style of inexperienced captain Khaya Zondo.

Morgan said it was natural progression to hand Zondo the massive responsibility of leading the side when veteran Morne van Wyk unexpectedly stepped down from the role before the start of the one day season.

Since then‚ Zondo has largely covered himself in glory leading the Dolphins to the top of the Momentum One Day Cup standings after four matches where they have won three and lost only once.

“He is competent‚ brave and a natural leader and I am happy with the way he has led the side in the one day competition so far.

"We still have a long way to go until the end of the season but he has shown so far that he has what it takes to establish himself as a legendary leader of this side in the future‚” said Morgan.

On Wednesday‚ the Dolphins comprehensively beat the Knights at the Mangaung Oval in Bloemfontein by seven wickets to earn a bonus point and they have a one day turnaround where they visit the Warriors at St Georges Park in Port Elizabeth on Friday afternoon.

On having to play two matches in a space of three days in different provinces‚ Morgan said he was not too bothered by the daunting challenge.

He said the players must get on with the business because it is the way the fixtures have been structured.

“It is what it is and the players must just get on with it and acclimatise.

"We knew about this at the beginning of the season and we have been preparing knowing that we will come across situations like this.

“Everyone has been excellent in our run so far this season with important contributions and we are happy.

"There is going to be pressure to stay there at the top of the log but to be honest I would rather be at the top than at the bottom.”

In other matches scheduled for Friday afternoon‚ the Cobras are at home to the Lions at Boland Park in Paarl with the visitors looking for an important away win to help them move from the bottom of the table.

The Titans are at home to Knights at Willowmoore Park in Benoni with the home side looking to return back to the top of the log.