COMMENT: Fining Pirates for the crowd trouble at Loftus won't be enough 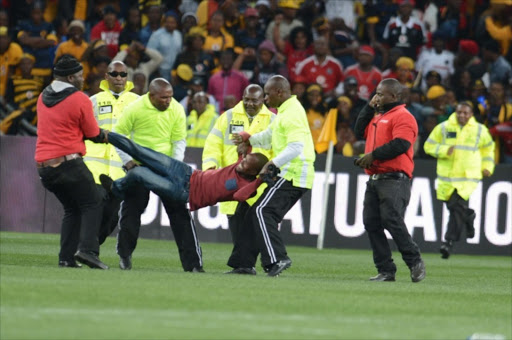 A fine of one or other party – even a hefty one for Orlando Pirates – will not suffice.

Honest‚ visible intention and action taken to improve security at matches is what is required should the Premier Soccer League wish to emerge with credibility from the fiasco that was the pitch invasion at Loftus Versfeld two weekends ago.

Thus far‚ the noises emerging from the PSL have not been encouraging.

They have been:
* A 132-word statement on behalf of the league saying that‚ as it was titled‚ the “PSL strongly condemns acts of hooliganism at Loftus Stadium”.

* An assurance made by PSL chairman Irvin Khoza‚ though he was acting in his other capacity as chairman of Pirates‚ announcing new coach Kjell Jonevret on Monday‚ that the video evidence was being reviewed before decisions would be taken on action.

Also in his capacity as Pirates chairman‚ Khoza made the assurance at his press conference the week before‚ on the Monday after the scenes at Loftus‚ that his club would cooperate completely with the process of the law.

That was not a PSL undertaking.

We can accept that there are processes for action to take place.

If‚ though‚ the multibillion-rand PSL‚ which trumpets its wealth and standing among the world’s best emerging leagues at almost every opportunity‚ aspires to such levels‚ then it must act accordingly.

What are the international standards on such occurrences?

When Reading fans invaded the pitch with ugly scenes of flare-throwing in an FA Cup tie at Majedski Stadium on Monday‚ March 16‚ 2015‚ the UK press published by the following day that the Football Association had announced an investigation.

When there was a pitch invasion at Aston Villa’s FA Cup quarterfinal against West Brom on Saturday‚ March 8‚ 2015‚ an investigation was announced on the Monday.

Consider the wording of the FA statement announcing the probe:

“The FA has contacted both Aston Villa and West Brom to request their observations in relation to the disturbing crowd incidents … .

“As well as liaising with both clubs‚ the FA is working closely with West Midlands Police and notes that a number of arrests have already been made.

“All available video footage will be studied by the relevant parties to identify anyone who has committed an offence and ensure they face the appropriate punishment.”

Compare it to the wording of the PSL statement last Monday:

“The Premier Soccer League strongly condemns acts of hooliganism by some of the fans at the Sundowns v Pirates Absa Premiership fixture at Loftus Stadium on Saturday.

“The League apologises to all the supporters and stakeholders – those who were at the stadium and also those watching on television – who were inconvenienced by what happened.

“… The Premier Soccer League is awaiting reports from various stakeholders on what transpired.”

The condemnation of hooliganism – seemingly a statement of what would be assumed to be the obvious – does not constitute an undertaking of action.

In fact‚ the PSL has actually shied away form making any such assurance.

Let alone the details of such action provided by the FA.

It smacks of careful wording to avoid being held accountable to any solid undertaking.

The point made does also illustrate that pitch invasions occur around the world‚ even in Britain and central Europe‚ where match security standards are the best in the world.

But in South Africa the problem has appeared to be getting out of hand‚ and PSL security’s capability at matches of dealing with pitch invasions has appeared inadequate.

This seems an easy criticism to make post-fact.

But consider these lines written by this reporter‚ published on Times Media platforms last month – less than two months ago – in a story titled ‘Five things we want to see happening in South African football in 2017’:

“A fan was shot dead – accidentally‚ by a policeman – during a pitch invasion at Kaizer Chiefs’ final league match of the season against Chippa United at Nelson Mandela Bay Stadium in May 2015.

“The strides made in PSL security from the handful of overweight‚ sjambok-wielding guards who could not contend with occurrences such as gates being broken down in the 1990s to today are almost immeasurable.

“But things can always improve.

"Certainly by European‚ or even Asian‚ standards‚ the PSL still lags.

"And one senses from the increase in recent incidents – such as the league match between Sundowns and Chiefs at Loftus in November starting late amidst poor organisation – that standards have slipped.

"They need to move in the other direction.”

This was no prophesy‚ but simply an observation from a reporter who attends a lot of PSL matches.

There appeared glaring errors made at Loftus that would require urgent remedying.

The shenanigans among a group of supporters behind the south goal‚ from which the pitch invasion originated‚ began when Sundowns scored their fourth goal‚ with fans interfering with TV cables‚ which led to SuperSport losing their live feed.

More security should immediately have been moved to that side of the stadium and the instigators removed.

This did not appear to happen‚ or not enough‚ at any rate.

There did not appear to be enough security to mobilise to that stand without leaving the rest of the stadium exposed.

The incident‚ as with previous pitch invasions in SA‚ raises questions about the number of PSL security officials deployed to matches‚ and their level of training to cope when things go wrong.

In SA‚ fans by reputation and behaviour conduct themselves peacefully – hooliganism is mostly a foreign concept.

So these apparent deficiencies in security standards would seem to slip under the radar until something goes wrong.

For now we accept the PSL’s explanation that‚ for them‚ such things take time.

With lives at stake though‚ indications that match security standards will be probed and revisited would appear a priority.

The fans who make South African football what it is by going to stadiums deserve better.

Nobody wants to revisit the nightmare of the 43 lives lost in the Ellis Park disaster of 2001. - TMG Digital