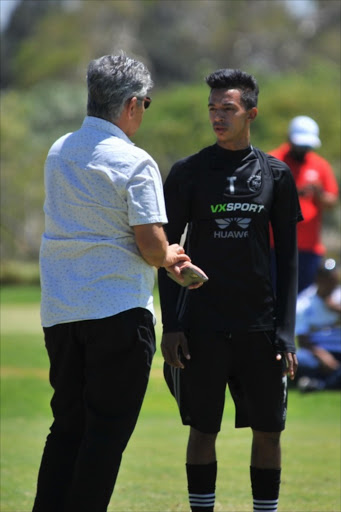 Ajax Cape Town have yet to make a decision on the future of Zambia striker Aubrey Funga and winger Sameehg Doutie‚ who are both still training with the club.

The pair are hoping to win a contract from coach Stanley Menzo and have spent some two weeks at Ikamva‚ but have still not been offered a deal.

“They are still with us here‚ but there is no change to their situation‚" Ajax CEO Ari Efstathiou told Times Media Digital.

"They are both just still training with the team and we will see what happens.”

Efstathiou did not put a timeline on when a decision would be made‚ but with the season set to restart in a little over two weeks‚ it would seem likely one would be made soon.

Funga is on trial from Zambian champions Zanaco‚ while Doutie is a free agent having officially left Indian Super League (ISL) side Atletico de Kolkata.

He could yet be re-signed by the franchise owned by Spanish giants Atletico Madrid‚ but even so is available to play for another club for the next six months as preparations for the ISL season only start in August.

Doutie started his career at Ajax in the 2007/08 season and quickly became a fixture before leaving for Pirates in 2011/12.

After just six months there he was sold to SuperSport United‚ where he was in and out of the side for the next three seasons.

He had a loan spell at BidVest Wits from January 2015 and immediately after signed for Atletico in the ISL‚ where he has been a success‚ winning two league titles.

Doutie was part of the Ajax side that came close to winning the Absa Premiership title in the 2010/11 season under Foppe de Haan‚ and has at times in the past come close to a national team call-up without ever playing for Bafana Bafana.

Ajax have already brought in Zambian international midfielder Rodrick Kabwe from Zanaco and could add his teammate Funga to boost a frontline that recently lost Jucie Lupeta after the latter was released.

Funga was a prolific scorer for Zanaco last season in helping them to the Zambian Super League title and can also play behind the strikers as a creative midfielder. - TMG Digital