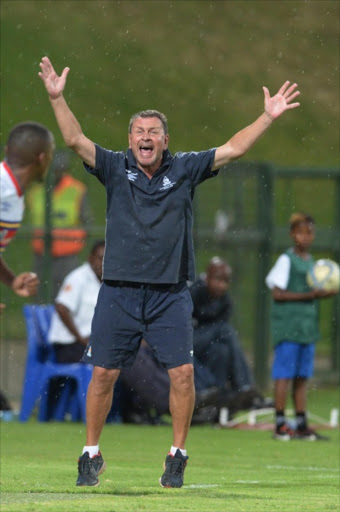 Ambitious National First Division side Stellenbosch FC are planning a significant overhaul of their squad as they seek to win promotion to the topflight this year.

Coach Sammy Troughton has revealed to Times Media Digital that the club could make as many as six new signings‚ with six players also tipped to leave the team.

He says who those incoming players are has not been decided quite yet with the technical team still in discussions with management.

But former Jomo Cosmos and Bloemfontein Celtic defender Cheslyn Jampies‚ as well as ex-Lamontville Golden Arrows forward Mauricio Barrios have been trying out with the team.

“The break came at the right time for us because we had lost a little momentum with four draws and then two losses at the end of the year‚” Troughton says.

“We feel that we need to freshen up the squad quite a bit‚ so there will be players coming and going out.

“But the couple of weeks or so that we have been back have been good‚ if everything is geared up to the re-start of the league on February 12.”

At one stage Stellenbosch were pacesetters in the second tier this season but have since been overtaken by Thanda Royal Zulu‚ who hold a commanding 10 point lead at the top of the table from Royal Eagles.

Eagles are Stellenbosch’s next opponents‚ making it a crucial re-start for them if they are to finish in the top three this season and earn a place in the Promotion/Relegation playoffs.

“Unless Thanda have a spectacular dive in form you would have to say that top spot is done and dusted‚” Troughton says.

“So that leaves everybody in about position two to 10 all fighting for second or third place and the playoffs.

“There are only five points separating those Eagles in second and Mbombela United in 10th‚ so it is a really tight little mini-league that we are playing in.

“We felt we should have done better in the first half of the season and picked up more points than we did‚ so for us it is disappointing.

“But we want to be one of those sides that hits the ground running in the second half and makes a big push for promotion.” - TMG Digital