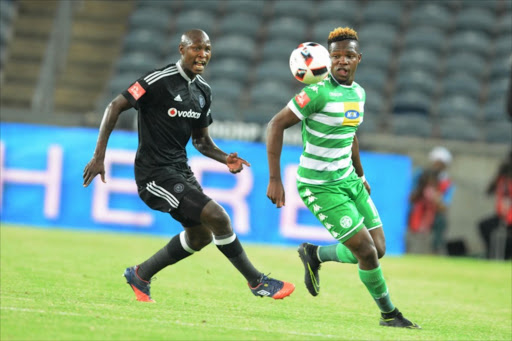 You could see why Orlando Pirates continue to drop points against lower-table teams in their 2-1 Premier League defeat against Bloemfontein Celtic at Orlando Stadium on Tuesday night.

Oupa Manyisa’s soft 12 finish into an open goal after a Celtic defensive blunder was cancelled out by Lantshene Phalane’s 80-minute equaliser from Bucs goalkeeper Jackson Mabokgwane’s even more farcical mistake.

Celtic had been industrious and tenacious against an increasingly wayward Pirates in the second half, and plucked a second goal and a winner by Tshepo Rikhotso five minutes into injury time.

Really, though, with all their talent available to them, if eighth-placed Pirates continue to play this sort of haphazard football, which lacks in cohesive direction, they will continue to bleed points against sides they should be far more convincing against.

This was Pirates’ fifth match without a win. After a 1-0 defeat at Orlando against a well-drilled, quality combination in SuperSport United, Bucs’ last four results say much.

They followed draws against Baroka FC and Highlands Park with a 2-1 defeat away against Maritzburg United. Tuesday’s defeat was just their second in the league this season, but worryingly for Bucs, they have had just two league victories at Orlando.

Muhsin Ertugral’s military regime from the start of the season may have resulted in something of a self-implosion, but successor Augusto Palacios’s lack of a clear plan other than for players to express themselves is turning out to be equally unconvincing.

Pirates shaded the opening 45 minutes, but only just, and took a 1-0 lead to the break.

The Buccaneers, though, were gifted that opening goal by a miscommunication at the back from Celtic.

Goalkeeper Patrick Tignyemb and centreback Wandisile Letlabika hovered indecisively over a ball on the edge of their area, before Letlabika appeared to panic and lifted the ball over his keeper, allowing Manyisa to run round, collect and finish into an open goal.

For Celtic, former Buccaneer Khethowakhe Masuku’s free-kick was excellently shaped to allow Rikhotso to run in for a free header over the bar.

Bucs replied with a well-drilled training ground movement, Patrick Phungwayo crossing for Tendai Ndoro to head down, with Manyisa in a position to sweep in a second but Tignyemb saving with his legs onto the crossbar.

The Free Staters, though, continued to create chances, Tshegofatso Mabasa in space on the left to hit a low shot a foot wide across goal.

In the second half, Bucs never so much managed to push to ram home their one-goal advantage, more running haphazardly with little structure or collective gameplan in a hope of scoring another against a plucky, decently structured Celtic.

With Bucs ineffective it was Celtic who opened the home team halfway through the second half as Deon Hotto teed up Musa Nyatama in space in the middle, who steered an attempt to place a shot wide.

An equaliser seemed on the cards. If Pirates’ opener had come from a soft mix-up, though, Celtic’s was farcical.

Midfielder Phalane punted forward from right midfield with a hit-and-hope long pass that was allowed to bounce by Pirates’ defence, and Mabokgwane raise his arms to indicate he was allowing the ball past, over his head, to go out. It was a spectacular misjudgement as Bucs’ keeper had to turn and watch it continue bouncing straight into his own net.

In injury time Rikhotso beat a defender in the area to a low cross and banged in a winner for Celtic.