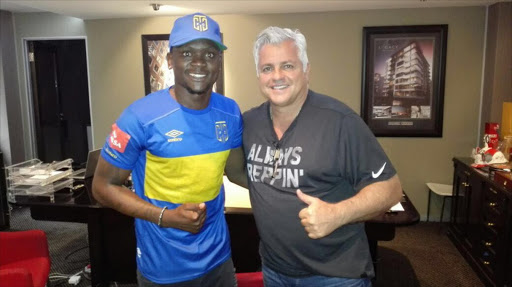 Newly-crowned Telkom Knockout champions Cape Town City are not resting on their laurels after they confirmed the capture of former Bafana Bafana winger Luyolo Nomandela on Monday.

The free agent has been drafted into the squad after impressing coach Eric Tinkler following a lengthy trial.

It ends a long search for a new club for the 27-year-old‚ who has seen his once promising career stall in recent years.

He had trials with Ajax Cape Town last month but was not signed.

The club had concerns over his weight and his salary demands‚ and decided to pass.

City coach Eric Tinkler hinted to Times Media Digital at the player’s signing last week when he confirmed he had been doing “very‚ very well” on trial.

The club will now push for his registration card with the Premier Soccer League in what is a busy week for them with home games against Platinum Stars (Tuesday) and SuperSport United (Friday).

The club had an opening in their squad following the termination by mutual consent of the contract of Australian midfielder James Brown‚ who made three appearances for the club earlier this season but was clearly well off the pace for the Premier Soccer League.

Nomandela burst onto the PSL scene with Free State Stars in the 2012/13 season‚ which he followed up with another fine showing the following campaign.

That led to a big-money move to Mamelodi Sundowns ahead of the 2014/15 season‚ but he made just two substitute appearances in six months at Chloorkop and he was farmed out on loan to Moroka Swallows for the second half of the campaign.

He spent the second half of last season on loan at Jomo Cosmos‚ but could not help them avoid relegation.

He was released from his Sundowns contract in October.

Nomandela made his only two appearances for Bafana Bafana within three days of each other in August 2013‚ both off the bench‚ scoring in a 2-0 win over Burkina Faso. - TMG Digital