Habana calls 2016 the lowest point of his career 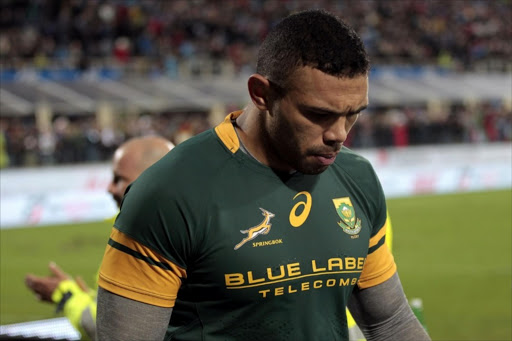 Veteran wing Bryan Habana has labelled the 2016 season the lowest point of his illustrious career‚ in a heartfelt message on social media.

Prior to the Test against Italy on November 19‚ Habana told TMG Sport that he believed he still had a role to play with the Springboks‚ but a subsequent 20-18 defeat against the Italians has seemingly altered that view.

“The pain‚ disappointment and lows of what happened over the past three weeks and that has been happening over the past six months is by far the toughest and lowest I have ever experienced in my rugby career‚ and I've had many lows‚” Habana said in a lengthy Instagram post.

“To even begin to explain where it's all gone wrong is immensely difficult as there are so many things across the board to dissect. You cannot put it down to just one thing.

“Purely from a player’s perspective‚ our on-field performances‚ bar a few individuals at certain times‚ hasn't been up to standard and we take full responsibility for that despite all the off-field issues.”

The 124-Test veteran‚ who has scored a record 67 Test tries‚ did not expand on what those “off-field” issues were.

But in recent weeks coach Allister Coetzee has pointedly remarked that picking overseas-based players such as Habana has been detrimental to the team.

His reasoning was that players joined the squad too late to fully integrate into the team patterns and also that their conditioning was at a different level to that of locally-based players.

They are perhaps valid concerns‚ but were undermined by Coetzee’s decision to continue picking those players. He is allowed to select overseas-based players‚ but he does not have to choose them.

“I honestly felt that I could make a positive influence and impact both on and off the field in 2016‚ and unfortunately I haven't been able to do that‚” Habana said.

“I apologise for the part I played in the results of this year. I fully understand the hurt‚ dissatisfaction and despair felt about where this current Springbok team is and I'm also prepared to face all the criticism that comes my way in the part I've played.

“Like you all‚ I also want to see the Springboks be a force to be reckoned with. I want to instil pride back into the jersey so it can be a symbol of hope and unity‚ that it has been on so many occasions‚ for our country.

“I believe open and honest discussions need to be had with all the key role players‚ administrators‚ politicians‚ coaches and players to start a proper process of rebuilding and implementation of structures.

“Whether or not I'm a part of this group going forward‚ or whether changes get made on an administrative‚ coaching or players level‚ we can never lose the belief that we can fix it.” – TMG Sport