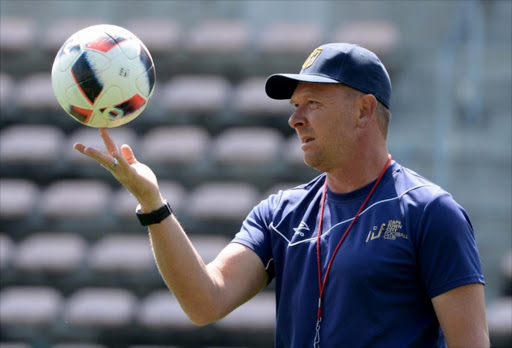 Cape Town City sit on top of the Premier Soccer League for the first time in their short history but their coach Eric Tinkler was having a hard time raising a smile after his club’s 1-1 away draw with Kaizer Chiefs on Tuesday.

“I need to be a reflection towards my players and I can’t show that I am happy. The fact of the matter is that we are only 11 games into the season and it is not at this stage that you can say you are going to win the league‚” Tinkler said after the game.

“Ask me the same question if we are sitting in the same position with 10 games to go and I’ll be a much happier person than what I am right now. I’m well aware there is still a long‚ long season ahead of us; there is a Christmas break ahead of us and all of that can affect the team.”

The draw ended a seven-match wining streak for City‚ who will play in next weekend’s Telkom Knockout final‚ but the point was enough for the new club to go one above Bidvest Wits and SuperSport United in the standings.

“I would have been happy with a point away against Chiefs if you asked me before the game but looking at the circumstances around the game‚ I’m very‚ very disappointed.

“There are not too many positives I can actually take from our performance. I thought we were very lethargic in the way we started‚ the first 20 minutes we really looked poor.

“Our players responded‚ to a degree‚ in the second half but truth to be told‚ I don’t think we deserved more than we got. A draw is probably a true reflection of the game.”

Tinkler’s admission comes despite a legitimate goal having been disallowed when TV replays showed that from Sibusiso Masina’s header the ball had crossed the line before Chiefs goalkeeper Itumeleng Khune had saved it.