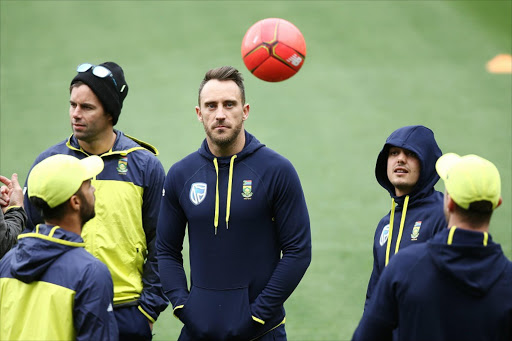 Adelaide - Faf du Plessis has been cleared to play in the third Test between South Africa and Australia in Adelaide on Thursday despite being found guilty of ball-tampering.

Du Plessis was found to have illegally changed the condition of the ball during the second test in Hobart.

He was fined 100% of his match fee and docked three demerit points - one short of what would have earned him a ban for Thursday's game.

The decision was taken by match referee Andy Pycroft after a hearing that lasted three hours in Adelaide on Tuesday.

Du Plessis’ fate marked the third time since 2012 that South Africans have been found to violate one of cricket’s most sacred tenets‚ which is also among its most often transgressed.

“After hearing representations from both parties and evidence from the umpires (Aleem Dar and Richard Kettleborough) in the second test as well as Marylebone Cricket Club (MCC) head of cricket‚ John Stephenson‚ Mr Pycroft found Mr du Plessis guilty of the offence‚” the International Cricket Council (ICC) said in a release.

“The decision was based on the evidence given from the umpires‚ who confirmed that had they seen the incident they would have taken action immediately‚ and from Mr Stephenson‚ who confirmed the view of MCC that the television footage showed an artificial substance being transferred to the ball.”

The video pictured Du Plessis slathering saliva on the ball using his fingers‚ which he had taken from his mouth - in which an object that could have been a sweet or a mint was visible.

The release said that “if Mr du Plessis reaches four or more demerit points within a 24-month period‚ they will be converted into suspension points and he will be banned”.

“Two suspension points equate to a ban from one test or two one-day internationals or two T20 internationals‚ whatever comes first for the player.”

Du Plessis has 48 hours from receipt of the written version of Pycroft’s decision to lodge an appeal. - TMG Digital