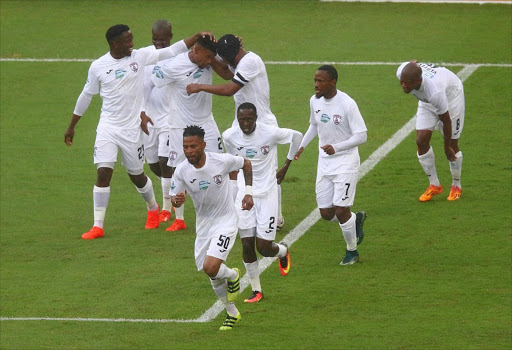 Two players deemed not good enough to made the transition from Kaizer Chiefs’ junior ranks to their senior side combined on Sunday to see Free State Stars upset their former club in the Telkom Knockout quarter-final at the Moses Mabhida Stadium in Durban.

Two players deemed not good enough to made the transition from Kaizer Chiefs’ junior ranks to their senior side combined on Sunday to see Free State Stars upset their former club in the Telkom Knockout quarter-final at the Moses Mabhida Stadium in Durban.

A 10 minute goal by Thato Thlone, who had been rejected as a junior at Chiefs, opened the scoring in the 2-2 draw after extra time but it was the goalkeeping heroics of Thela Ngobeni, who played just a single game in five years on Chiefs’ books, that ensured the upset result.

In the end it was a penalty shootout that produced a second major casualty of the weekend with Chiefs now joining holders Mamelodi Sundowns on the sidelines of the competition. Stars won 6-5 after a total of 12 spot kicks in heart-stopping drama at the end of the game.

Chiefs, after a recent bright spell, will now be plunged back in crisis after letting slip another chance for a trophy as their reputation as ‘cup kings’ is an increasingly distant memory.

Ngobeni made a series of bright stops in the game and two all-important saves in the post match penalty shootout from Lorenzo Gordinho and George Lebese to become an instant hero.

The first goal came quickly as Chiefs lost ball in midfield and allowed Stars to sweep it out wide to on-rushing left back Thlone, who was given space to cut inside by Chiefs’ fullback Ramahlwe Mphahlele before firing home a cracking shot with his right foot that ended more than 12 hours without conceding a goal for Itumeleng Khune.

But after that goal, it was a grim siege of the Stars goal by Chiefs that matched the wet and murky weather.

In the 19 minute a penalty appeal from Siphiwe Tshabalala was turned down after he went down far too easily after a challenge from Ngobeni.

Tshabalala looked to be already going past the goalkeeper but inexplicably decided the better option was to try to con the referee by falling down far too easily under minimal contact but found Victor Hlungwani in no mood to be hoodwinked. But the referee did not give Tshabalala the requisite yellow card for ‘simulation’.

Bernard Parker, restored to the starting line-up after nine games on the bench, looked lively in attack in tandem with Tshabalala as coach Steve Komphela turned to the old guard in making several changes to the side from midweek, including employing a five-man defence.

After half-time, Stars sounded early notice again – with a long range effort from Moketsi Sekola before retreated into defence

Ngobeni came up with three world-class saves in a 10-minute spell, starting in the 53 minute when Mphahlele set up a rare headed effort for Tshabalala that the Stars’ ‘keeper pushed away

A reflex save six minute later was much tougher, as Ngobeni stretched backwards to get a hand to deny a diving header from Michelle Katsvairo.

Then followed a stop low down to deny Tshabalala’s stop.

Khune made good save to deny Danny Venter as Stars had a rare counter attack with 10 minutes to go but Chiefs finally grabbed a first goal in five games from a corner with seven minutes left. Ngobeni punched the corner straight at substitute Edmore Chirambadare, who blasted home for his first goal in Chiefs’ colours.

Gordinho rose above the Stars defence deep in stoppage time at the end of the 90 minutes with a chance to win the game for Chiefs but directed his header wide.

Stars caught out Chiefs again eight minutes into extra time as a buildup on the right from Katlego Mashego saw the ball move inside to Goodman Dlamini, who played a delightful short pass for Thokozani Sekotlong to score from close range.

But two minutes into the second half of extra time Chiefs were level again from a set piece, this time seeing Mulomowandau Mathoho heading home a free kick, given far too much space close in by a timid Stars’ defence.

Mathoho rattled the woodwork with another header soon thereafter as Chiefs were just inches away from a come-from-behind success, but it went to penalties were Sifiso Mbhele could have won it for Stars with their last regulation kick when they were 4-3 up but blasted wide, only for Ngobeni to make sure of success in the end.