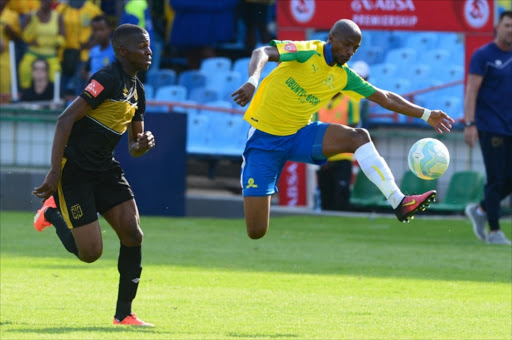 Mamelodi Sundowns wilted in Pretoria's fierce heat yesterday when they went down 2-1to a well drilled Cape Town City side.

Cape Town City captain Lebogang Manyama led by example with a brace and an impressive 90-minute performance to help the new boys record their third league win of the season. Sundowns were deserved losers but after their energy sapping Caf Champions League and Telkom Knockout Cup aberrations, this loss was due.

However, it was the absence of a cohesive performance from their back four that will leave coach Pitso Mosimane worried. They also looked jaded and fatigued.

When Cape Town City took the lead in the 22nd minute through Manyama, it was a deserved lead as the visitors had done the most of the incisive running.

They seemed to respond better to the heat than Sundowns did and the hosts again had to battle a slow start.

While they did not look like a side that was disrespecting the game, it was clear they were battling to adapt to the slower pace of the league. After all, it was only their second league game of the season and it showed.

Manyama was causing all sorts of havoc in his free role upfront and was at the heart of everything good done by the visitors.

Most of his trouble was caused on the right-hand side, which was where the goal came when Ebrahim Seedat's pass found the dangerous Aubrey Ngoma, who slipped the key assist through to his captain.

Ngoma should have scored City's second in the 43rd minute when Asavela Mbekile got in the way of his shot with Kennedy Mweene all over the place.

Manyama was again the problem with Tebogo Langerman's position coming into question. It was clear Sundowns were having issues with City's pace and teams with fast attackers may take note of this.

This continued in the second half when it cooled down but Sundowns also got into the game in the same manner in which they did during their 2-0 Telkom Knockout Cup last 16 win against Polokwane City.

However, this was a side with better defensive organisation and always cut down space when the hosts tried to run amok.

However, the one mistake they made led to Sundowns' 58th minute equaliser through Thabo Nthethe, whose well-placed header from a Khama Billiat freekick was too good for Shuaib Walters.

Halftime substitute Lehlohonolo Majoro should have put City in the lead in the 79th minute when combined well with Given Mashikinya to open up the Sundowns defence.

However, his indecision allowed Mweene and the struggling Sundowns defenders to regroup and clear the danger.

Manyama was not so generous four minutes later and showed Majoro how to convert a chance when he banged home Ngoma's cross from the left.

Again it was a cause of Sundowns uncharacteristically losing their defensive shape with Thapelo Morena at fault this time. It was a killer blow that Sundowns failed to recover from.