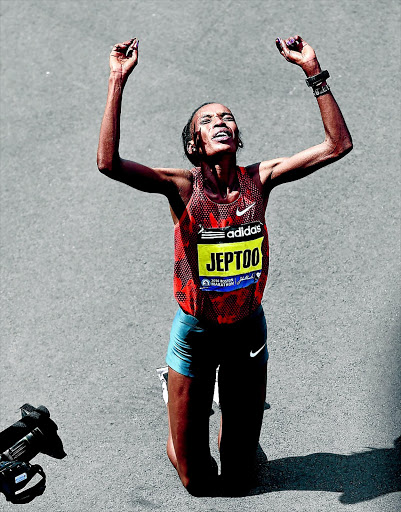 The Court of Arbitration for Sport has doubled a doping ban against Kenyan marathon champion Rita Jeptoo to four years. PHOTO: TIMOTHY A CLARY/AFP

Kenyan marathon runner Rita Jeptoo has had her doping ban doubled to four years and been disqualified from the Boston marathon she won in 2014, the Court of Arbitration for Sport (CAS) said yesterday.

Jeptoo was originally banned for two years by Athletics Kenya after testing positive for the banned blood-booster EPO in September 2014 but world athletics' governing IAAF challenged the ban and appealed to CAS for it to be increased.

The CAS panel found to its "comfortable satisfaction" that Jetoo used EPO "over a period of time to enhance performance".

The minimum sanction is two years but CAS found enough aggravating circumstances to double the ban and said it was obvious Jeptoo had used EPO "as part of a scheme or plan". CAS said the evidence included Jeptoo's long relationship with her doctor, that her EPO use was "consistent with her competition calendar" and that she hid visits to her doctor from her coach and manager.

It added that her conduct was "deceptive and obstructive" throughout the proceedings.

CAS said the original two-year ban, due to end on Sunday, would be extended until October 30 2018 and Jeptoo would be disqualified from all races in which she had taken part since April 17 2014.

This includes the 2014 Boston marathon which she had won.

Jeptoo had already been disqualified from the Chicago marathon which she won the following October.

She keeps the Boston and Chicago marathon titles she claimed in 2013.