From scout to CAF champ, Pitso has proven his worth 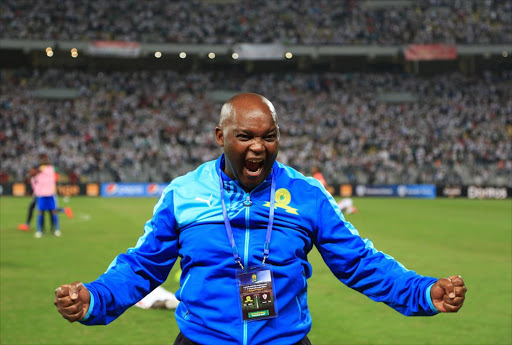 When the Pitso Mosimane story is told one day, it's sure to include the pinnacle that was Sunday's achievement with Mamelodi Sundowns, whom he led to the CAF Champions League title.

That story will also glance at his other accolades at Sundowns, such as the league titles and cup competitions won in the last four years.

Others will highlight his tumultous tenure at Bafana Bafana, which ended in dismissal in June 2012.

Before that Bafana experience, he had been plucked away from SuperSport United after turning the club's fortunes around within a few months of getting there.

But there are many other sides to Mosimane's story.

For instance, he once related a story of how he ended up at SuperSport. In the late 1990s towards early 2000, the club required the services of scouts around townships.

He volunteered, scouring places like Soweto in search of talent, occasionally spotting a player or two and recommending them to Matsatsantsa.

He was then roped in in that role on a full time basis as a chief scout. While working there he was promoted to assistant coach.

Bruce Grobbelaar was the head coach and, when results didn't come, with the club facing a relegation scrap, the SuperSport management installed Mosimane on an interim basis.

He never looked back, seized the opportunity and entrenched himself into the post so much so that it became difficult to dislodge him.

Thus Mosimane's coaching career path was set - having started out as a volunteer scout.

Today, he and Sundowns will receive a thunderous welcome at OR Tambo International Airport, after landing there with the most prized asset in African club football.

It's a prize that Mosimane's hard work and dedication to the game fully merits. It's just reward. This is a man who, upon landing with him from one long national assignment a few years ago, travelled from the airport to a PSL match.

He's very passionate, this Mosimane, and doubtless anyone who does not share his ideals would find themselves iced out.

Over the years his rise as a coach has been meteoric. He adjusted to new coaching methods and ensured he was never left behind. Nobody could have seen the value of adding someone like Rulani Mokwena - a novice with no known playing experience - to the Sundowns bench.

Today, Sundowns have undoubtedly the most competent technical team in the country, a far cry from when they had a full bench of "legends" who often felt entitled to a job at the club.

As Patrice Motsepe admitted, there was a time when money was being wasted at Sundowns - on overpriced, underachieving coaches and players alike.

Mosimane arrived to end all that, and has turned Sundowns into real winners. When he got there in December 2012, they had not won anything for four years.

Today, they can parade three trophies they hold - the Telkom Knockout, the Absa Premiership and Champions League - all won in the last 10 months. It's five trophies in the last two years if you add the league championship of 2014, and last year's Nedbank Cup.

It's not by stroke of luck or, as some have claimed, thanks merely to "Motsepe's millions".

It takes hard work and sleepless nights to produce the kind of Sundowns Mosimane has built over the past four years.