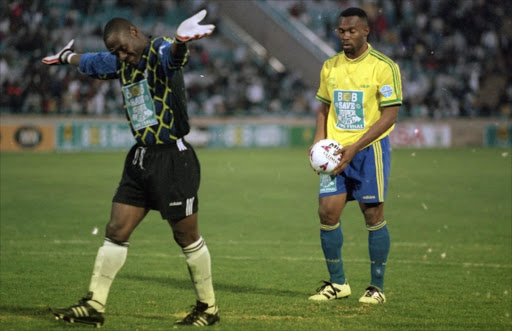 Continental glory is all that's missing in Sundowns' cabinet under Motsepe's reign, and the club believes it has a realistic chance of winning the CAF Champions League with coach Pitso Mosimane at the helm.

"Mr Motsepe has invested so much in the club and I feel they should be doing well on the continent. I wish they can make him happy by winning the Champions League," Chukwu said.

The Nigerian holds Sundowns close to his heart and is regarded as one of their legends, but he'll have a tough time picking a side when the seven-time PSL champions host Nigerian giants Enyimba in a Champions League Group B match at Lucas Moripe Stadium on Wednesday (7pm).

Chukwu started his career at Enyimba in 1992, and has a soft spot for them too.

Enyimba have been struggling in the domestic league with just one win in their last five matches, and were beaten 1-0 by Zamalek in their opening Champions League group match.

"It's very hard on me. Sundowns is my family and Enyimba is my family. I can't say who will win, but I am praying for both teams to qualify for the semifinals," Chukwu said.

"It's going to be interesting. Enyimba know they have lost three points [against Zamalek] and I think they were unlucky in that game. They will come out to try [and] get a result. That could work for them or against them because if they can open up, then it will allow Sundowns to attack them."

The 40-year-old said Sundowns' Khama Billiat and Enyimba's lethal striker Mfon Udoh are the players who are likely to decide the match on Wednesday.

"I am really surprised by how well he (Billiat) has done with a small body. He has a lot of strength. He is pushing the attack. I always watch Sundowns and I am happy that you in South Africa voted for him to win player of the year.

"Mfon is a slow poison. He knows how to convert chances. Enyimba always believe something will happen when he is on the pitch. He is always in the right position," Chukwu said.