Mohoje to lead strong SA A side against Saxons 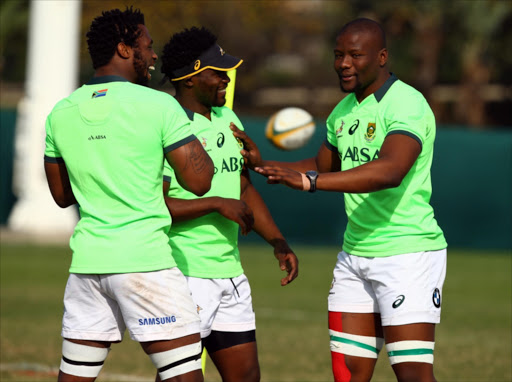 Four Springboks will turn out for the South Africa A side that will take on the England Saxons in Bloemfontein on Friday night.

SA A coach Johan Ackermann on Wednesday named a strong side that has a balance of youth and experience for the first of two matches between the two teams.

Captain Teboho Mohoje‚ prop Vincent Koch‚ lock Stephan Lewies and No8 Nizaam Carr are the quartet of players with Bok tests under their belts and they have earned starting berths for the match to be played at the Free State Stadium at 7.10pm on Friday.

The bench is also well-armoured with a duo of Boks – prop Coenie Oosthuizen and scrumhalf Piet van Zyl – eager to inject some firepower in the latter stages of the match.

“I think we have a brilliant mix of experienced players who have tasted what test rugby is all about‚” Ackermann said on Wednesday.

“We also have the four members of the Springbok squad and exciting youngsters who will be pushing for higher honours in the coming seasons.”

Scrumhalf Nic Groom‚ flyhalf Garth April‚ hooker Scarra Ntubeni and flank Sikhumbuzo Notshe are the quartet that was sent down from the Springbok camp to take part in the match.

“There is a lot of value in having players with test and Super Rugby experience working with these youngsters and I’m sure we’ll see some excitement on the field on Friday‚” said the coach.

With a solid forwards pack‚ Ackermann will also expect thrills from what promises to be an electrifying backline.

The halfback pairing of Groom and April will surely spearhead a promising attack with a solid midfield partnership of Howard Mnisi and Francois Venter on their outside.

It will also be interesting to see what Stormers rookie winger Leolin Zas will do as he is selected as the starting fullback.

Ackermann expects an onslaught from the visiting Saxons side.

“We are up against a very formidable opponent‚ and the Saxons have been together for a long time already‚” said the coach.

“So our players know that they have to be sharp‚ focused and on top of their game for the full 80 minutes on Friday.

The SA A team is: