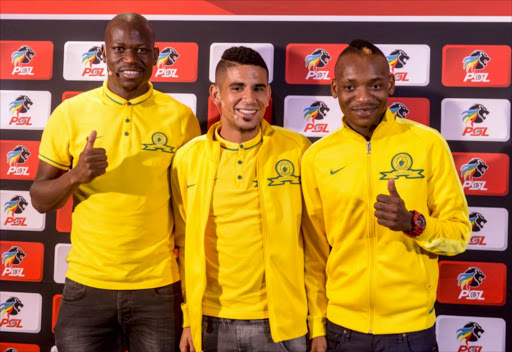 Hlompho Kekana, Khama Billiat and Keegan Dolly of Mamelodi Sundowns during the announcement of the 2015/16 PSL Awards nominees at PSL Headquarters on May 23, 2016 in Johannesburg, South Africa. (Photo by Sydney Seshibedi/Gallo Images)

Keegan Dolly has put behind him his previous sad experiences with Mamelodi Sundowns to claim a place among the nominees for the Premier Soccer League's top awards.

The Westbury-born midfielder could barely contain his excitement after he was nominated for three PSL awards yesterday.

Dolly, 23, said he had set himself modest targets this season and did not expect to contest the main award - the footballer of the season - with teammates Hlompho Kekana and Khama Billiat.

''I'm proud of myself, but I didn't expect this to happen," said Dolly, who was also nominated for the Absa Premiership's best midfielder and players' player awards.

"For me, this season was about learning from the older guys like Teko Modise and Hlompho Kekana to gain all the experience I needed. This is something that I will cherish for the rest of my life."

The Safa-Transnet School of Excellence graduate was once in Sundowns' junior team but was released in 2012.

His career took off soon after joining Ajax Cape Town and he rejoined Sundowns at the beginning of last season.

'' I knew that once I started gaining the experience playing for Ajax, coming [back] to Sundowns was going to be easy," he said.

Dolly has missed just one match all season since his return to Chloorkop where hehelped the Brazilians to the league title and the Telkom Knockout. His call-up to the Bafana Bafana team to play Gambia in an Africa Cup of Nations qualifier on June 4 was the cherry on top.