Derby will end one of the Soweto giants’ chances of silverware 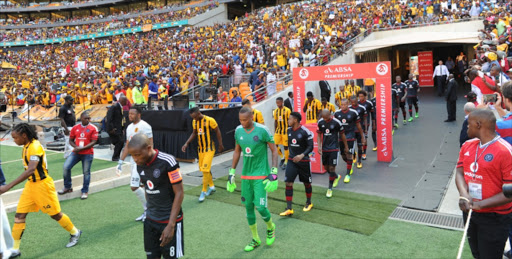 Injuries‚ suspensions and Tinkler’s indecision saw the Buccaneers take the field for a period with a different defensive combination in each game as Pirates conceded silly goals and slipped down the Premier Soccer League log.

In his last three matches Tinkler has fielded a settled combination of Patrick Phungwayo at left-back‚ Thabo Matlaba on the right‚ and Ayanda Gcaba and Edwin Gyimah as the central pairing.

Pirates lost 1-0 to Free State Stars in Bethlehem two weeks ago‚ but have since beaten Mpumalanga Black Aces 3-1 in Nelspruit and Bloemfontein Celtic at Orlando Stadium on Saturday.

“With that back four we’ve managed to get good results. Thabo Matlaba‚ I think everyone recognises‚ is a versatile player. He can play with both feet‚” Tinkler said at yesterday’s pre-derby press conference in Parktown.

“The added value of having both Patrick and Thabo is that they are both very offensive wing-backs.

“We’re trying to create consistency. And obviously with the results coming there is no need for me to tamper with the back four.

“We kept a clean sheet in the last game‚ and I felt the defence performed well in both our last two matches.

“But after each game you analyse it. Look at where your strengths and weaknesses lie‚ and at the team you’re playing against next.

“This is the fifth time we’re playing Chiefs this season — we know their strengths and weaknesses.

“And that might mean us having to tamper with the starting XI‚ making a change here and there.”

An improvement at both ends of the field has seen Bucs win two matches in a row to rise to seventh place in the PSL.

Tendai Ndoro scored a brace against Aces‚ giving Tinkler options upfront along with the experience of Lehlohonolo Majoro‚ although big‚ bustling Thamsanqa Gabuza had lost some confidence‚ the coach admitted.

“I have three strikers holding up their hand‚” Tinkler said. “Unfortunately luck hasn’t been on Gabuza’s side and he’s missed quite a few chances that have led to us not winning games.

“That has led to him losing confidence. Now it’s a case of us man-managing and rebuilding him.”

Tinkler admitted he would have preferred to meet Chiefs later in the competition.

Saturday’s match will end one of the Soweto giants’ chances of silverware this season.

Chiefs have reached both previous domestic cup finals‚ losing 1-0 to Ajax Cape Town in the MTN8 and the 3-1 to Mamelodi Sundowns in the Telkom Knockout.

“Truth be told we would have liked to have met Chiefs somewhere in the semis‚” Tinkler said.

“The harsh reality is we find each other in the first round‚ and unfortunately one has to fall — hopefully that’s not us.

“The advantage both teams have is the fact we have played each other four times this season. So players know exactly what their responsibilities are on the day.

“Now it’s just up to who pitches up on the day and who’s more motivated.”

Rooi Mahamutsa‚ Happy Jele and Sifiso Myeni have rejoined full training for Bucs. Siyabonga Sangweni (knee ligament) is out for the rest of the season. Thandani Ntshumayelo is unavailable.