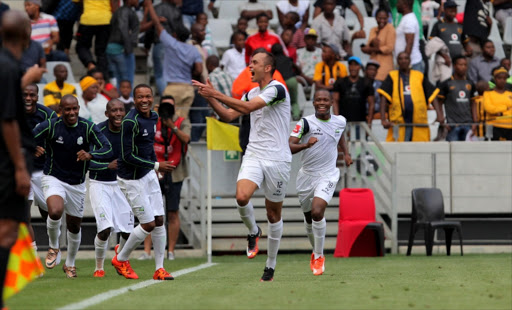 Two goals in the last five minutes from Eleazar Rodgers saw Platinum Stars turn the tables on Kaizer Chiefs and snatch away victory in a remarkable heist that leaves the champions now an uncomfortable eight points behind the leaders in the Absa Premiership.

Rodgers scored with a diving header at the end of a clever counter attack in the 86th minute and then tucked away the winner from a rebound off a stoppage time to see Stars to their first win of the year in a 2-1 triumph.

It came after their goalkeeper Mbongeni Mzimela had kept them in the game with some outstanding saves as Chiefs looked odds-on to win, having led at the break.

Amakhosi had been hoping for a win that would put them in good stead ahead of Saturday's crunch Soweto Derby against Orlando Pirates.

But Stars had other ideas and proved party poopers with the two late goals that came after they had struck the woodwork three times.

Chiefs survived an early scare when Stars' centre back Isaac Nhlapo hammered his header against the crossbar as he rose unchallenged to meet Mduduzi Nyanda's corner after just eight minutes.

Within a minute Ndumiso Mabena went narrowly wide with a rasping shot as Chiefs took some time to settle into the game.

But clever combination play between Siphiwe Tshabalala and Reneilwe Letsholonyane tested Stars in the midfield and kept them on the back foot as Chiefs probed for an opening.

William Thwala, making his full debut, struggled to fit in the rhythm while George Maluleka was full of industry but let down by a heavy touch.

The goal, however, came not from open play but rather a free kick swung in from Tshabalala that Abraw headed perfectly down into the ground and then saw it bounce deceptively over Mzimela.

The Stars goalkeeper atoned for misjudging Abraw's header with two miraculous stops from Maluleka in the first four minutes of the second half.

Chiefs were perfectly placed to put the game beyond Stars at that point but Mzimela proved a deserved man of the mach.

Mzimela's save from Tshabalala in the 85th minute continued the frustration of the fans, who number 19 445 and were almost all supporting Chiefs.

But then came the two hammer blows and a massive flip for Stars, who ended a run of five matches without success.