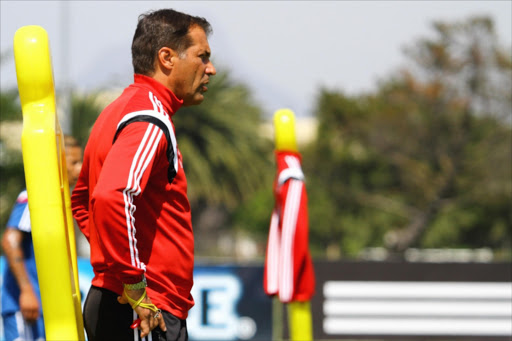 There is little time for Ajax Cape Town to dwell on their MTN8 success as they enter what could be a crucial week in their league season.

The Urban Warriors defeated Kaizer Chiefs in the MTN8 decider in Port Elizabeth on Saturday, having entered the match as the top side in the Absa Premiership as well to underline their excellent start to the season.

That good form will be severely tested this week with league matches against Mamelodi Sundowns and Kaizer Chiefs.

Ajax travel to Lucas Moripe Stadium in Atteridgeville to tackle Sundowns on Wednesday, before hosting Amakhosi at the Cape Town Stadium on Saturday in a fixture that will have plenty of edge for a number of reasons.

Chiefs will want to prove a point after their MTN8 final heartache, while Ajax are still incensed that the Soweto club made an application to play three of their "home" games at the Cape Town Stadium, later in the season.

Ajax coach Roger de Sa has urged his players to quickly put behind them the cup success and concentrate on their upcoming league challenges.

"I told them it doesn't matter what happens today, tomorrow when I get home I still have to pick up the dog pooh and mow the lawn," he said.

"This win is important for us but we must keep our feet on the ground and keep going."

De Sa has kept trumpeting the fact that his first target this season is the 30 league points that should secure his side's safety from relegation.

But with the way the side finished last season and started this one, especially with key players still to return from injury, the question is whether they can be considered genuine title contenders this year? This coming week could go some way to answering that question.