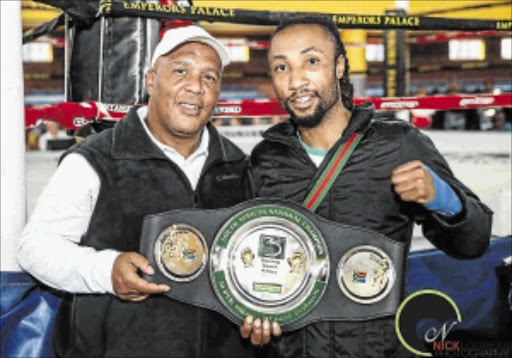 Mahlangu is one of several boxers and officials who are allegedly owed money by Handi after participating in a tournament staged by the promoter in East London last month.

IBO junior flyweight champion Roy Loreto and Filipino countryman Jetly Purisima were part of the bill and they left SA without being paid.

They are believed to have painted the country in a negative light when they arrived back home, with international reports alleging that the two Filipino fighters warned other boxers not to accept fights in SA unless they are paid in advance.

Rass has never been one to mince his words and he accused Handi of behaving like a ''thug" for not keeping his end of the bargain.

''I told him straight in one of our conversations that he is behaving like a thug," said Rass yesterday. Mahlangu won the national title from Siviwe Hasheni with a ninth-round stoppage. The new champion is understood to be owed R15000, while the dethroned Hasheni is owed R80000.

When approached for comment yesterday, Handi said: ''You have been writing stories about me without giving me the opportunity to talk, so go ahead and write what- ever you want." Rass urged Boxing South Africa to revoke Handi's promoter's licence. ''BSA should not allow people like Siphatho to have licences. BSA is there for the welfare of fighters and not for those arrogant promoters who think they can boost their egos and end up treating fighters with disdain," a seething Rass said. BSA chairperson Ntambi Ravele said: ''He [Handi] will be appearing before the disciplinary committee soon."