Perseverance finally pays off for Joubert 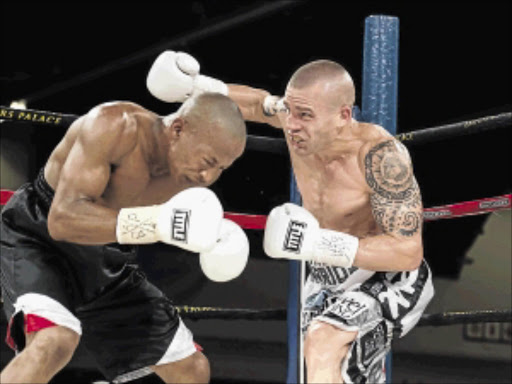 Take that! Warren 'The Warrior' Joubert punishes Lungisa Jikani in their clash for the vacant SA junior welterweight title, which Joubert won by a wide margin at Emperors Palace on Monday night PHOTO: n-Squared

Joubert defied the cynics who had already written his obituary, by outpointing Lungisa Jikani at Emperors Palace.

The belt was vacated by Ali Funeka last year.

''If you have passion in what you do, you must persevere and have patience, then you will conquer," said Joubert.

''Boxers at my age are slowing down but I'm picking up. Credit to my new trainer Colin Nathan and my stable-mates."

Nathan's other charge, young gun Dee Jay Kriel, took his career up a notch when he pulverised the not-so-clever Clever Modingi into submission in three rounds.

In the best bout of the night, 20-year-old Kazakhstan fighter Roman Zhailaouv, whose corner was manned by Harold Volbrecht, punished Willis Baloyi over six rounds. Baloyi, who took the fight on short notice after Luyanda Jako got cold feet, gave his best.

Flo Simba stopped Marcel Mulumba in the fourth round.

In another fight, Paul Kamanga outpointed Stone van Aswegen over eight rounds. The least said about the rematch between Johnny Muller and Donald Kapamba, the better. Muller won by a third-round stoppage.