Flo Simba back in the ring 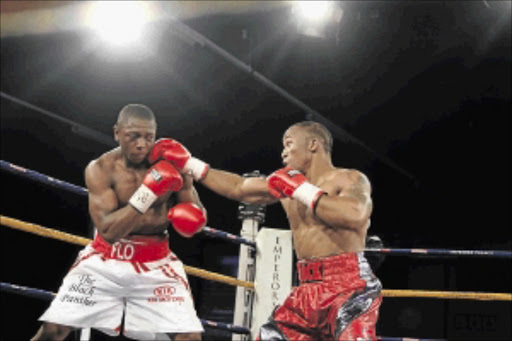 Flo "Black Panther" Simba makes a come-back at Emperors Palace on April 13, where he last fought in 2012 when he suffered back-to-back first-round losses to Thabiso "The Rock" Mchunu.

Without taking credit away from Mchunu, Simba was struggling with the debilitating effects of diabetes at the time, as he was not treating the disease correctly.

After those losses, Simba had a two-year hiatus to concentrate on his health, on the advice of his promoter Rodney Berman and manager Brian Mitchell .

Simba said he consulted doctors and medical experts and now has his condition under control.

Boxing South Africa (BSA) has since sent him for numerous medical tests, including a brain scan. The popular former IBO Youth heavyweight champion was cleared and relicensed by BSA last year.

His trainer Harold Vol-brecht expects him to dust off the cobwebs and beat Marcel "Big Ben" Mulumba in their non-title fight that will form part of "The Hurricane" bill, staged by Berman and Jeff Ellis.

The battle for the vacant SA junior welterweight title between Warren Joubert and Grant Fourie will top the card.

Nkosinathi Joyi seems to have reached a cul-de-sac, following his second knockout loss to IBO junior flyweight champion Rey Loreto, who floored him in three rounds in Monaco last year. The Filipino did the same on Sunday, in quicker time, knocking Joyi out in one round at the Mdantsane Indoor Sports Centre.

Mfusi Maxhayi, who forfeited his WBF International bantamweight belt, failed to make the weight limit, but went on to stop Mxolisi Nombewu in the second round.