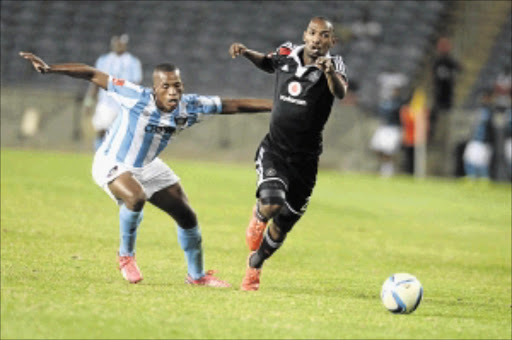 TRICKSTER: Siyabonga Zulu of Chippa United tries in vain to stop trickey Thabo Rakhale of Orlando Pirates during an Absa Premiership game at Orlando Stadium on Tuesday night. Bucs won the match 1-0 and they host Revenue Authority FC in the Champions League on Saturdayphoto: Lefty Shivambu/Gallo

IT'S usually midway through the second half when Orlando Pirates fans go wild at the sight of Thabo Rakhale running towards Eric Tinkler to get his final instructions before coming on.

IT'S usually midway through the second half when Orlando Pirates fans go wild at the sight of Thabo Rakhale running towards Eric Tinkler to get his final instructions before coming on.

Rakhale has become a fan favourite at the Buccaneers ever since he made his first appearance for the club against SuperSport United in November, and the 25-year-old is coach Tinkler's game changer.

The skilful midfielder, who Pirates signed from Sivutsa Stars [now Royal Eagles] three years ago, grew up watching former Bucs crowd pleaser Steve Lekoelea and has been given freedom to express himself on the pitch, with his flicks and tricks usually accompanied by cheers from the fans.

Rakhale, who was on loan at Polokwane City last season, is likely to feature again as an impact player for the Bucs when they face Mpumalanga Black Aces in an Absa Premiership fixture at Orlando Stadium today (7.30pm).

"Coach Tinkler is giving us freedom to play and he told me that whatever I do with the ball should benefit the team. Also I chat to Lekoelea sometimes and he encourages me a lot. We are homeboys," said Rakhale, who is from the Vaal.

"I think the experience I got from Polokwane City last season has helped me adjust to the style of PSL football. If Pirates had not loaned me out, then it was going to be difficult for me.

"When I came back from City I knew I would not walk straight into the line-up. I had to be patient. I got my chance and I have not looked back since then."

Third-placed Pirates host Aces looking to extend their unbeaten run in the league to 11 matches.