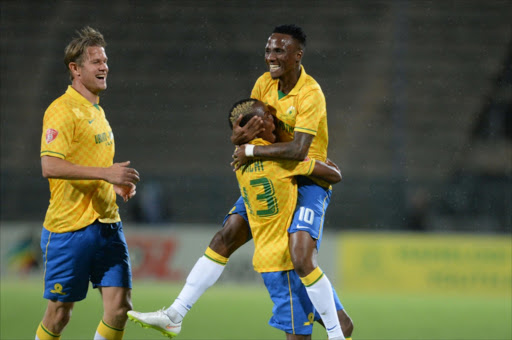 The ink had barely dried on Fani Madida's new contract as the permanent coach of Moroka Swallows.

Sadly for Swallows, the margin could have been heavier had Downs not been so wasteful.

Leon Prins, the man who had finally given Madida job security and possibly even a raise, looked on from the stands with displeasure. Who could blame him?

Swallows had conceded four goals in 24 minutes on a night the Premier League returned following an Africa Cup of Nations-induced recess. The break looked to have worked for Sundowns, desperate to close the gap on leaders Kaizer Chiefs.

Swallows looked out of sorts, especially goalkeeper Greg Etafia, who wasn't helped by his poor defence.

The Birds' capitulation began when Downs captain Alje Schut connected with a dipping free kick into the penalty box from Teko Modise to head home.

A minute after the opener, Etafia was beaten by another header, this time from striker Cuthbert Malajila as the forward rounded off Anthony Laffor's excellent run down the flank.

Malajila bagged his second in the 22nd minute, an easy tap in that exposed the Swallows defence. The fourth was pure comedy and Etafia should have done better. Modise took a hopeful shot a few meters shy of the halfway line and it surprisingly beat the keeper, putting the game beyond Swallows' grasp.

The Dube Birds got a consolation goal when they were awarded a penalty on the stroke of halftime.

Felix Obada, an early substitute in place of striker Siyabonga Nomvethe, was fouled in the box by Mzikayise Mashaba and referee Daniel Bennett pointed to the spot. Luyolo Nomandela, on loan from Downs, stepped up to send keeper Dennis Onyango the wrong way.