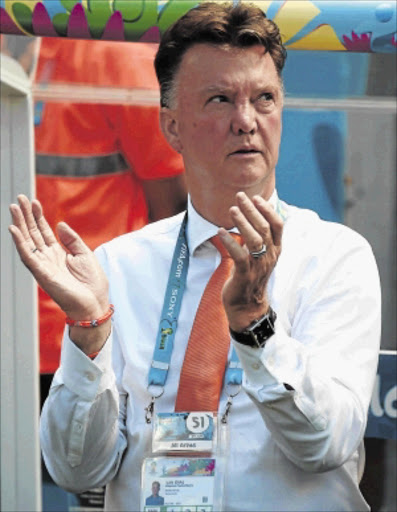 Louis van Gaal has challenged his Manchester United players to replicate their impressive home form on the road ahead of a testing New Year's Day visit to Stoke City.

Since losing at home to Swansea City on the opening day of the season, United have turned Old Trafford into a fortress, winning seven and drawing one of the subsequent eight games on their home turf.

But they have won just twice on their travels -- victories at Arsenal and Southampton that the demanding Van Gaal concedes were fortunate -- and the Dutchman is demanding an improvement in 2015.

"When I'm saying that every week we are improving, then we have to show that against Stoke City," said the United manager, whose side start the year in third place in the table.

"In away matches, (we have beaten) only Arsenal and Southampton; then, we were the lucky team. I have said that also.

"We have to dominate in away matches, and I hear from (assistant coach) Ryan (Giggs) that Stoke City is a very difficult pitch. We have to show that in spite of it being very difficult at Stoke. Maybe we can show that."

From their long injury list, United have defenders Chris Smalling, Luke Shaw and Rafael da Silva back at full fitness, although winger Angel di Maria is still out with a pelvic problem.

"Herrera has trained with us for the first time, but he does not have much rhythm," Van Gaal said. "Januzaj has also trained for two sessions, but he was ill and you have to recover from illness."

Meanwhile, Van Gaal has paid tribute to the backing his team have been shown by the club's supporters despite their slow start to the campaign.

"The fans are fantastic," he said. "We were at a moment with 10 matches and 13 points. That's not good. In spite of that, the fans have supported us always, and in the right way.

"I want to thank the fans for that. They always have belief in the players and their manager. I think the main reason that they have supported us is because of the fighting spirit of my team.

"We were not always ahead in matches, but they have fought until the end and, a lot of times, with good success."

Stoke manager Mark Hughes knows United better than most following his successful playing days at Old Trafford and believes they made the right call by appointing Van Gaal as the successor to David Moyes.

"Suddenly he seems to be the right figurehead for the club," said the Welshman. "He's the guy you sense they need, given that last year was a time of transition for them.

"And they're still going through that process to a certain extent. They need a strong person at the head of the club and he certainly gives that impression to everybody.

"Whether or not he's clear in his mind where he wants to go long-term, only time will tell. But he talks a lot about his philosophy and that takes time for a manager to instil.

"He's working hard and changed personnel. He's given guys that were maybe out in the cold another opportunity.And he's changing shapes and formations. That takes time for people to take that information on board."

After back-to-back wins against Everton and West Bromwich Albion over the festive period, 11th-place Stoke are bidding to register three consecutive victories for the first time since March.