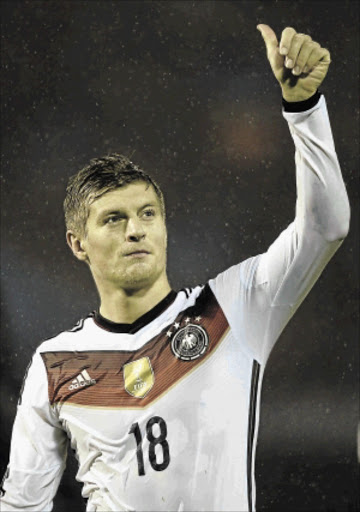 VIGO, Spain - Beating Spain was the perfect way to end a stellar year, Germany coach Joachim Loew said after the world champions recorded a 1-0 victory in a friendly on Tuesday.

The European heavyweights were clashing for the first time since Spain's win by the same scoreline in the 2010 World Cup semifinals and Germany's victory was their first against the Iberian nation since 2000.

Both teams were severely depleted by injury and the lashing rain in Galicia made playing conditions difficult in a match decided by a Toni Kroos strike a minute from time.

"I don't think one could wish for a better way to end the year," said Loew, who led Germany to their fourth World Cup crown in Brazil in July. "I was very pleased with our defensive performance and in attack we had better chances in the second half than in the first."

Since beating Argentina 1-0 after extra time in the final at the Maracana, Germany have faltered in qualification for the Euro 2016 finals in France where they will hope to claim the title Spain have won at the last two attempts.

With four matches played, Loew's side are second in Group D, three points behind Poland who beat Germany 2-0 in Warsaw last month.

The next round of qualifiers are in March and Loew will hope the likes of goalkeeper Manuel Neuer, captain Bastian Schweinsteiger and centre backs Mats Hummels and Jerome Boateng, who all missed Tuesday's game through injury, are back in the side.

"During the whole week there have been positive things that make us think we have players for the future," Spain coach Vicente del Bosque told reporters.