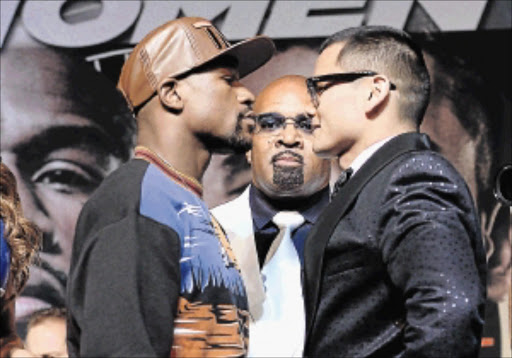 Mayweather improved his perfect professional record to 46-0 with a majority decision victory when they first clashed in the ring on May 4, a fight in which the American felt the Argentine did "a little bit of everything".

While Maidana has urged his opponent "to stop crying and just fight" in their rematch, Mayweather plans to go about his business as usual when he defends his World Boxing Association belt and his World Boxing Council title.

"I just have to go out there and just be me and be first," five-division world champion Mayweather, 37, told reporters while preparing for the scheduled 12-round bout at the MGM Grand Garden Arena.

"I can't really say how the fight is going to play out, but I'm pretty sure he's going to be once again extremely dirty and wild. My job is to keep everything under control the best way that I can."

Maidana made a fast start to their May 4 bout, launching a blizzard of punches and trapping his opponent against the ropes at every turn in the first few rounds.

Mayweather, widely regarded as the world's top pound-for-pound boxer, went on to dominate the contest before one judge ruled the fight a 114-114 draw while the other two scored the bout 117-111 and 116-112 in his favour.

"The fight was not close," said Mayweather. "He came out, he won the first round, I won the second round, he won the third and the fourth, and from the fifth on he lost every round.

"If you guys notice, I got tackled, the guy tried to knee me, I got a head-butt, there were rabbit punches, there were low blows and the list goes on and on." - Reuters