MTN8 not a Pitso priority 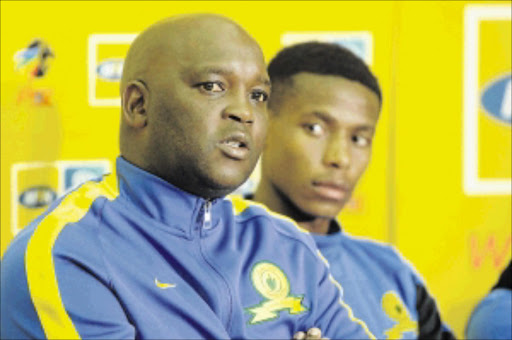 PITSO Mosimane is not a man of few words, but the Mamelodi Sundowns coach almost paid no attention to his first challenge this season - their MTN8 quarterfinal clash against Platinum Stars on Saturday.

The Absa Premiership-winner preferred to rather talk about the club's "priorities", which include retaining the league title and an impressive run in next year's CAF Champions League, until a Premier League official pleaded with journalists to ask questions about this weekend's cup encounter at Loftus.

For Mosimane, the R8-million prize bonanza for the winners isn't enticing enough, but continental glory and remaining champions take centre-stage.

"I took my management team and we visited the league post-season and we made them aware of our situation. We asked to be a little bit ahead because we don't want to find ourselves in a situation where we are six or eight games behind, like Pirates and Chiefs last season," said Mosimane yesterday.

"It was a progressive meeting and they've given us the space. We need to take a leaf out of Pirates' book because for me they are the best team in the country. How do you measure that? On the field, where they got a star [as 1995 Champions League winners], which is big in Africa. Sundowns hold the record for most league titles, but we still can't compare to Pirates."

When finally pressed for his thoughts on facing Dikwena, a side that has often got the better of Mosimane's men, the coach said the Rustenburg outfit's depleted squad doesn't make them less of a threat.

"Our main focus is not that aspect because we have seen SuperSport United lose players in the past and win the league three times in a row," he said.