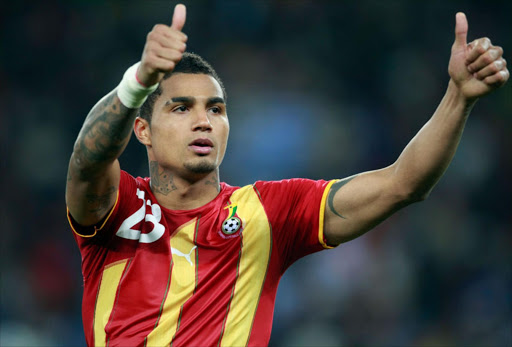 Back home after Ghana's elimination, Appiah said Wednesday he will now only select players who are "disciplined, committed and ready to die for the country."

Ghana coach Kwesi Appiah will not call up Kevin-Prince Boateng in the future after their World Cup bust-up.

Back home after Ghana's elimination, Appiah said Wednesday he will now only select players who are "disciplined, committed and ready to die for the country."

"For now, Kevin-Prince Boateng is not part of my plans," Appiah said.

Boateng, a Schalke forward, was thrown out of the team camp ahead of its final group game at the World Cup for insulting Appiah during a training session. AC Milan midfielder Sulley Muntari was also sent home for hitting an official.

"I believe in discipline and l know managing egos is difficult, but I would not allow such egos to affect the team," Appiah said.

Appiah didn't say if there would be any repercussions for Muntari.

Ghana, a World Cup quarterfinalist in 2010, went out in the group stage in Brazil after two losses and a draw in a campaign troubled by off-field issues. The players were involved in a dispute with officials over unpaid bonuses ahead of the decisive final group game against Portugal and team discipline appeared to disintegrate.

The Ghana Football Association also said Wednesday that the conduct of midfielder Michael Essien was "under review" after he failed to take part in a pre-game warm-up ahead of the Portugal game.

Essien was on the bench for the match, which Ghana lost 2-1.