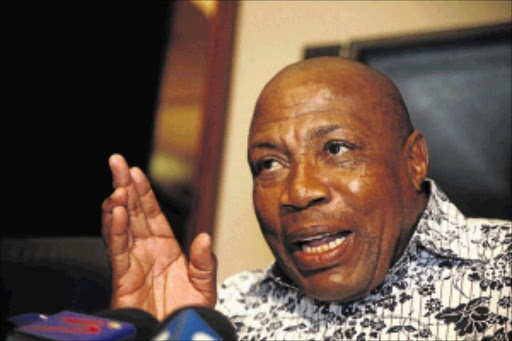 CLAWS ARE OUT: Ephraim Mashaba

AMAJITA coach Ephraim "Shakes" Mashaba said he needed "tigers in the middle of the park" against Ethiopia in the return leg of their 2015 African Youth Championships qualifier at Milpark Stadium on Sunday.

The match kicks off at 3pm.

"The good thing is that we know what to expect after playing Ethiopia in the first-leg match," Mashaba said.

"They are a good side, especially in the midfield where they gave us some problems.

"We need tigers in the middle of the park to thwart any danger the opponents could pose. We don't want them to play at all."

The SA Under-20 side go into this game with a 2-0 cushion from the first leg in Addis Ababa two weeks ago. Siyanda Ngubo and Tshepo Chaine scored.

"We are going for a victory with more goals, but at the same time we should avoid conceding," said Mashaba yesterday.

"I'm happy the players we wanted are here and we do not have injuries," he added.

The overall winner of Sunday's tie will play Cameroon in the final round of the qualifiers.

The finals will be held in Senegal in March next year with the top four countries qualifying for the World Cup finals in New Zealand.