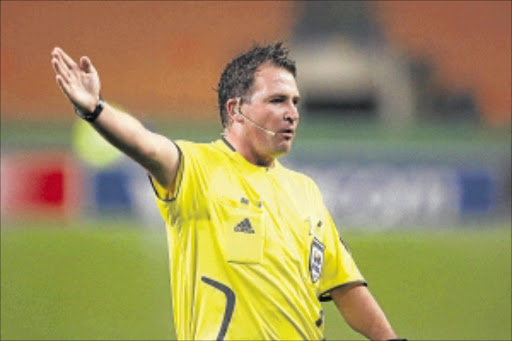 WORLD Cup-bound referee Daniel Bennett has been working the table more often in recent weeks than the field, serving as fourth official rather than in middle.

He says it is because he wants to avoid injury before heading off to Brazil, a request agreed to by the refereeing authorities.

Bennett departs for the tournament next month as a member of the back-up list for the finals, which means he will not officiate at any match but serve as a reserve if needed and as a fourth official.

He had been on the short-list for the tournament and took part in all the seminars and tests but both he and linesman Zakhele Siwela fell short of selection, when the final list of World Cup officials was named in January.

Fifa has selected just three from Africa for the tournament.

They are Djamel Haimoudi of Algeria, who was voted Africa's top referee at the CAF awards in January, Bakary Papa Gassama from Gambia, who handled the second leg of the African Champions League final between Al Ahly and Orlando Pirates in Cairo in November, and Ivory Coast's Noumandiez Doue.

The trio will be accompanied by their designated assistants that they worked with over the past three years.

Bennett and the Cameroon referee Neant Alioum were named as "support duos".

Siwela, however, was not included.

Both Bennett, who is 37, and Siwela, only 31, are still young enough to officiate at the 2018 finals in Russia if they can stay on the Fifa panel.