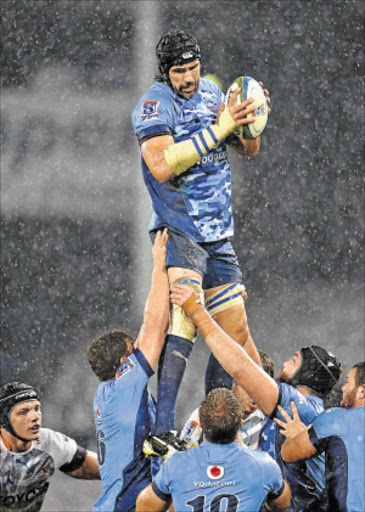 SLOWING DOWN: Victor Matfield of the Bulls

Bulls captain Victor Matfield was relieved his side reversed a four-match losing streak when they beat the Cheetahs 26-21 at Loftus Versfeld on Saturday but rued missed scoring opportunities.

Matfield, however, cautioned that they still had hard graft ahead of them as they need to win their remaining five round-robin matches to give them a realistic chance of reaching the playoffs.

"We will take this now and hopefully get some momentum and some confidence going into the next game, we know it is going to be another huge game on Saturday," Matfield said.

"We will need to be even better than tonight."

The Pretoria side are in 10th place on the overall Super Rugby table on 24 points and next face a Stormers side playing with renewed vigour.

Bulls coach Frans Ludeke praised his charges for their patience after the visitors opened a 18-9 lead going into the half-time break.

The Cheetahs scored two tries in the opening 40 minutes of the match but the hosts added 17 second half points -- through two converted tries and a penalty conversion -- to claim the victory.

"We had momentum, they got away with an intercept try and suddenly we were under pressureâ -- we were patient,"Ludeke said.

"They had all the momentum and all the things going their way in the first half, we just fought our way back and when we had the lead I thought we really defended well and managed the game well."

Ludeke attributed much of their success to a well-functioning maul which the Cheetahs were incapable of stopping.

"We squeezed them into turnovers, the maul was working well for us and we got the momentum every time we got penalties and we converted. We were unlucky not to score more tries," Ludeke said.

Cheetahs looked the more dangerous side but they could not capitalise on their opportunities while coach Naka Drotske also felt they were in a good position following the first half.

"At half-time I thought we were doing reasonably well and in the second half the Bulls' maul was quite effective and forced a lot of penalties and that put a lot of pressure on us," he said.

"Every time we conceded a penalty, they kicked out and we had to defend for the next five minutes."

Drotske said his troops had enough opportunities to score in the second half that would have increased their chances of winning the match.

"We had one or two opportunities in the second half where we should have finished and we did not and that is the way this game is at this level," Drotske said.