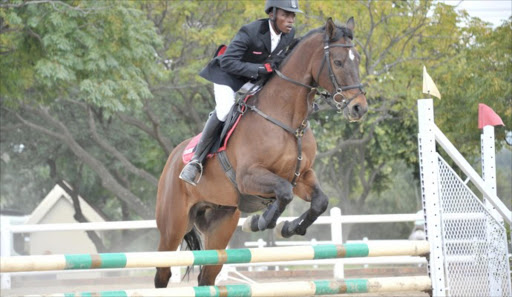 Show jumping is a sport not usually associated with black people however young rider Vincent Lebogang Moemise is fast dispelling that notion.

Moemise developed the love for horses at a very young age after learning about them from his adopted mother Sharon Lipa.

“My adoptive mom had horses and I loved trying out different things so one day at the age of 9 I decided to get on a horse and haven’t looked back since,” says the 22-year-old.

Moemise began with dressage at his mom’s riding school.

Dressage is defined by the International Equestrian Federation as a sport where "horse and rider are expected to perform from memory a series of predetermined movements."

In 2012, two years after moving on to show jumping, his hard work earned him a sponsorship from Nissan in 2012.

Although the sport is still dominated by white riders, Moemise believes that young black people should not be deterred by lack of funds if they want to take part.

“Nissan has a development program which they can go to and my door is always open for those who are keen to learn,” he says.

Moemise will be taking part in the 5th Nissan Easter Festival which takes places from Saturday 12th April until Monday 21st April 2014.

The first weekend will concentrate on the dressage classes and the rest of the show will mainly feature show jumping and the Inter Africa Cup.

The festival is not only about the competitions, there will also be food stalls, entertainment, child-friendly activities and market stalls throughout the duration of the festival.

The Nissan Easter Festival will be held at 1 Dahlia Road in Kyalami and entrance is free.