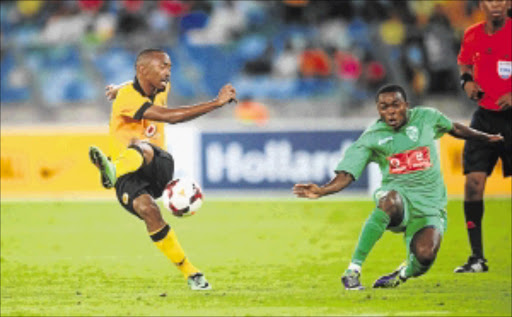 FOR all the excitement of the championship chase between Kaizer Chiefs and Mamelodi Sundowns, the race for the top scorer award this season could turn out to be the most feeble in South African professional soccer history.

Bernard Parker of Chiefs is the current leader with a paltry 10 goals, two ahead of his teammate Knowledge Musona and Edward Manqele of Moroka Swallows.

Unless there is a flurry of goals in the last month of the campaign, the top goal scorer's tally this season could turn out to be the least ever.

That unwanted milestone was set last year by Sundowns' Katlego Mashego in the colours of Swallows when he scored 13.

Parker has six games left to try and increase his tally and make sure of an award he has come close to winning in the past. But he last scored in mid-February in the 3-0 win over Bloemfontein Celtic.

Last season, Mashego and Parker shared top place with 10 goals each before Mashego pulled away to win in the closing weeks.

Musona's last goal was against Ajax Cape Town mid-March and Manqele has scored just twice since the mid-season break.

Siyabonga Nomvethe's tally of 20 to win the award in 2011-12 season was the first time the winning total had hit the 20-goal mark in six seasons in a severe indictment on the league's strikers.

Pule "Ace" Ntsoelengoe's total of 36 goals for Chiefs in 1974 is the most in one season by a player since the NPSL launched in 1971.

Its successor, the NSL, had a 28-goal haul in 1991, the year all leagues were unified, as its record. It was set by Fani Madida in the colours of Chiefs Since the launch of the PSL, the best tally has been 25 by Collins Mbesuma, also for Chiefs, in 2005.