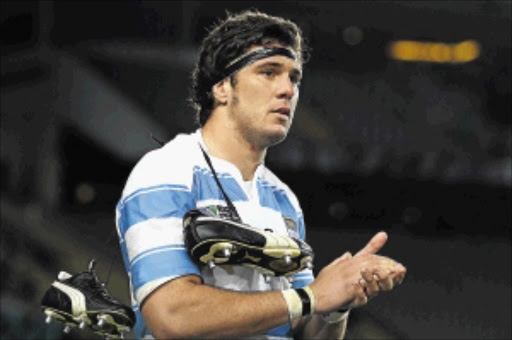 THROWN IN AT THE DEEP END: Lock Manuel Carizza of Argentina could be in for a mauling by the Lions in tomorrow's Super Rugby game at Ellis Park. Photo: Hannah Peters/Getty ImageS

ARGENTINIAN lock Manuel Carizza will be be thrust onto centre stage when the Stormers open their 2014 Super Rugby account against the Lions at Ellis Park tomorrow.

The abrasive Pumas forward will lead the lineout after injuries ruled De Kock Steenkamp and Ruan Botha out of the season opener.

Carizza, who speaks good English, has found his feet quickly in the Cape Town setup and could prove to be a key player in the early stage of the campaign, especially as the Stormers' lock stocks are thin at the moment.

He will partner Rynhardt Elstadt in the second row with Michael Rhodes on the bench. They're the only three fit locks in the group with Eben Etzebeth, Gerbrandt Grobler and Jean Kleyn also out with long-term injuries.

"Manuel has got the responsibility to run the line-outs and manage that," coach Allister Coetzee said.

"From what I have seen at training and in the warm-ups we are very happy with the way he has done it.

"We all know Rynhardt and his ability as a front lock. He has really trained well and worked hard over the off-season as well. Hopefully he stays injury-free.

"In last week's game the Lions had a 100% lineout success, and Franco [van der Merwe] is really good at contesting line-outs so they will try and put a lot of pressure on Manuel. But it is not just about Manuel.

"Duane Vermeulen is a great lineout exponent who understands it and he will give Manuel all the support he needs."

The Lions have not beaten the Stormers since 2006.

The Bulls and Cheetahs clash in Bloemfontein tonight in a match that could have a big bearing on the final finishing order in the SA conference.

Both teams lost their opening games last weekend and for the Cheetahs in particular it's a must-win encounter. They lost at home to the Lions in week one and cannot afford a second successive home loss before they embark on their Australasian tour.

The Bulls at least lost away from home last week when they slumped to a 31-16 defeat against the Sharks, but another setback would erode their confidence further.

Cheetahs coach Naka Drotske named an unchanged starting XV from the team that lost 21-20 to the Lions, while Bulls coach Frans Ludeke has made two changes to the pack with the injured Pierre Spies replaced by Jacques Engelbrecht and lock Paul Willemse dropped for Grant Hattingh.

The Sharks have named an unchanged team to take on the Hurricanes in Durban.