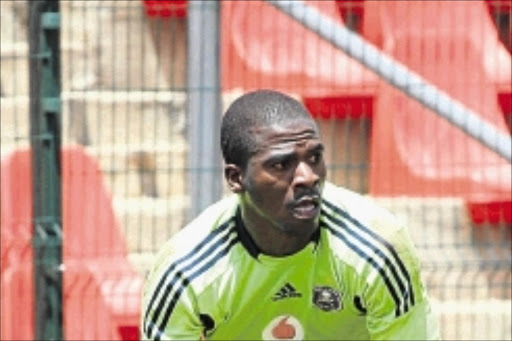 Pirates take on Matsatsantsa a Pitori at Orlando Stadium in their first league game of 2014 as they play catch-up. Kickoff is at 3.30pm

"As far as I know, he [Jali] is in. As the technical team, we keep on talking [about him in our plans] and know that he is not leaving," said a relaxed De Sa at the club's media day at Rand Stadium yesterday.

Jali's contract will expire at the end of the season, but his handlers will meet Bucs chairman Irvin Khoza this week to discuss a new deal.

Last week, Jali told Sowetan he had no plans to leave the Buccaneers and was hoping Khoza would offer him a new deal before the end of the month.

But yesterday Jali refused to comment, saying: "We can talk about anything in life but not the contract, please." Pirates have this week signed three players - Mozambican striker Helder Pelembe, winger Lucas Sibeko from Moroka Swallows and defender Ntsikelelo Nyauza. Nyauza was snatched from African Youth Sports Academy.

On the game against Matsa-tsantsa, goalkeeper Senzo Meyiwa said: "We want to start the year on a high note by winning the match. We want to win the league to return to Champions League football."

He joined from Israeli outfit Maccabi Haifa with an option of making it a permanent move. Ndlovu said he joined Matsatsantsa because they showed more commitment.