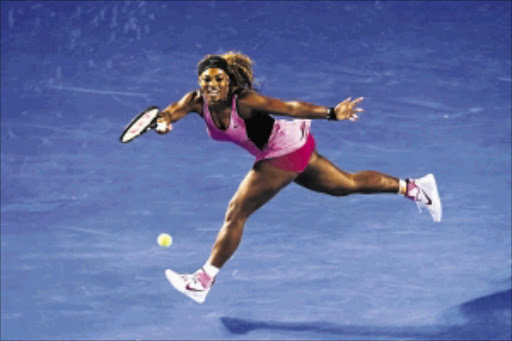 DOMINANT: Serena Williams of the US plays a forehand in her first-round match against Ashleigh Barty of Australia during day one of the 2014 Australian Open at Melbourne Park yesterday. Photo: Matt King/Getty Images

MELBOURNE - Novak Djokovic showed some early season rustiness, but Serena Williams roared into the second round like a well-oiled machine as the tournament favourites took centre stage on the first day of the Australian Open yesterday.

Williams, looking for her sixth title, closed the evening on Rod Laver Arena with a 6-2 6-1 demolition of local hopeful Ashleigh Barty after four-time champion Djokovic had overcome Lukas Lacko 6-3 7-6 6-1.

Earlier, there were shocks aplenty in the women's draw with the biggest coming when sixth seed Petra Kvitova fell victim to Thai world number 88 Luksika Kumkhum in front of a rapturous crowd on Margaret Court Arena.

Djokovic's new co-coach Boris Becker will have raised an eyebrow with the 30 unforced errors the second seed served up as he opened his quest for a fourth straight title in Melbourne.

The Serbian always looked like cantering to victory in three sets, however, and 23 minutes after taking a tight second stanza by dominating the tiebreak, he was firing down his 10th ace for the win.

Luksika was far from relaxed as she looked to close out her victory over Kvitova, but was soon bowing to all corners of the stadium having sealed the biggest win of her career 6-2 1-6 6-4.

Men's top 10 seeds David Ferrer, Tomas Berdych, Stan Wawrinka and Richard Gasquet earlier raced into the second round, eager to make the most of relatively mild conditions at Melbourne Park.