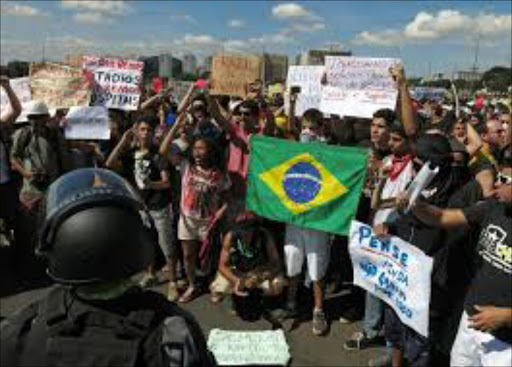 Even before the Confederations Cup opened in Rio de Janeiro, one team had emerged as one of the winners: Criciuma Salgueiro.

The female team won the Copa Popular in a match played on a backyard in protest against the Confederations Cup, the 2014 World Cup in Brazil and 2016 Olympic in Rio.

After their moment of glory, most of the women went home to poor neighbourhoods some of which were to be evacuated to make room for the mega sports events.

The alternative match in the Gamboa port neighbourhood was organized by a "People's Committee Rio."

It is one of 12 committees in the national ANCOP network, which criticizes the billions of dollars' worth of investments in the tthree major sports events and the consequent evictions of local residents.

The small match began just a few hours before the first game in the Confederations Cup in Brasilia - without glamour.

The artificial turf is worn and full of holes. It is covered by a green net which catches balls flying too high. Each match lasts for 10 minutes. The event features three female and 10 male teams.

"We are not against the Copa (World Cup) and the Olympics. They could be good for the country, but unfortunately, that is not so," says Paula Paiva from the People's Committee.

"People are driven out of their homes. Many of them have lived in the area for decades, and were not even really informed (about the evictions)."

The 24-year-old refers to the planned evacuation of Vila Autodromo in Barra da Tijuca west of Rio, where the Olympic village for the 2016 Games is being created. The area is home to about 500 families, many of which have lived there for 30 years. Most of them do not want to move.

"We are experiencing a violation of human rights in the name of these big sports events," the charter of the committee says.

The United Nations special reporter for adequate housing, Raquel Rolnik, agreed with some of the criticism.

"In several cases, residents were not asked and not allowed to participate in decisions seriously affecting their living standards," she said.

In Rio alone, 11,000 people have been resettled, according to the committee.

"About 29,000 more are threatened with having to move with the false argument that this is necessary for the World Cup and the Olympics," resistance organizer Mario Campagnani says.

His colleague Paula Paiva says the authorities do not inform the residents adequately.

"The city negotiates with individual residents and fears talking to the entire community. Many people have found out from newspapers that their houses will be evacuated. The lack of information forms part of the strategy," Paiva said.

The honorary "stadium speaker" in Gamboa, 33-year-old Vitor Mariano, warns: "When people are driven out of their homes, they are stripped of their identity."

The people's committees regard themselves as the "voice of the people" trying to draw attention to the enormous income differences in Brazil despite its economic upturn.

The "People's Committee" in Rio has chosen the well-known fairy tale figure Saci Perere as a symbol for the resistance. The small, one-legged, pipe-smoking figure with a red pointed cap can make himself invisible and plays a lot of pranks, but also fulfills wishes.

The committee members also wear red pointed caps. They only have one wish: that the World Cup and the Olympics would benefit the people.